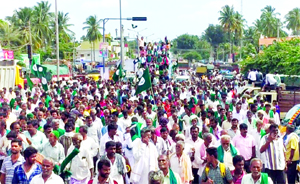 Chronicle Reporter, Bhopal Bhartiya Janta Party in Madhya Pradesh has decided to take out yet another yatra named Kisan Samman yatra from April 1 to 15 to tell farmers, about ‘2003 versus 2018’, what Shivraj government had done in last three terms compared to Congress rule. Congress lost power in MP in 2003 and two-time chief minister Digvijaya Singh handed over the reins of the state to BJP, which has been in power ever since. BJP Kisan Morcha state president Ranvir Singh Rawat in a press conference said the Kisan Samman yatra would start from Baldev Dauji Temple near Mathura in Uttar Pradesh, pass briefly through Rajasthan’s Dholpur and then enter the state through Morena, where CM Shivraj Singh Chouhan will welcome them and address the farmers. Rawat said later yatras will be taken at the assembly segment level where farmers will be apprised about what the BJP government had achieved in last three terms compared to Congress regime. He said farmers would be made aware of the welfare schemes of Centre and the state and their feedback would be sought. Rawat said the farmers would be asked what they were facing before 2003 and what was the situation now? “Shivraj Singh Chouhan has made historic decisions and launched mega schemes for farmers. Farmers will themselves tell us about the vast difference between 2003 and now”, he said. “We will also felicitate those farmers who have shown good performance and contributed in MP continuously wining Krishi Karman Award for last five years”, he said. Over the last one year or so, the state is witnessing a lot of yatras. After violent farmer agitation in Mandsaur last year, both BJP and Congress have taken out many yatras. Earlier this year MP government organised 35 day long Ekatm Yatra (journey of oneness) dedicated to Adi Shankaracharya . Barely five months after Narmada Seva Yatra, Digvijaya Singh started six month long Narmada parikrama, circumambulation of the Narmada river, from September last year.

Kissan Samman yatra: To be taken out from April 1 to 15, 2018 to reach out to the farmers in the election year. ‘Vikas Yatra’ of MP government: The yatra was taken out in November last year to showcase work done by the government for public welfare and development Digvijaya Singh’s Narmada Parikrama: Started on September 30. The six-month journey on foot is being claimed to be a ‘spiritual journey’. Kisan Swabhiman Yatra by Congress: July 1 -10, 2017. For supporting agitating farmers and their demands like right price for their produce and loan waiver Kisan Sandesh Yatra by BJP: June 27 to July 6. In damage control mode after Mandsaur violence, BJP tries to reach out to farmers. Narmada sewa yatra by chief minister Shivraj Singh Chouhan: Dec 2016 to May 2107. Claimed to be the biggest river protection campaign in the world by MP government.