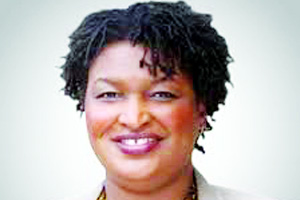 Agencies, United Nation, Democratic voters rallied on Tuesday for the chance to make history in November by selecting a ticket filled with female candidates, including a bid to elect the first African-American female governor in the United States. Stacey Abrams won the party’s nomination for governor in Georgia, where she faces long odds in a Republican-dominated southern state testing divergent Democratic strategies. She was among a slate of candidates selected by voters in four states to advance to the November midterm elections.Contests in Texas and Kentucky also moved women to the forefront of the fight for the U.S. House of Representatives, where Democrats need to wrest 23 seats from Republicans to gain control. Several races were a referendum on divisions within the Democratic party. Kentucky Democrats picked a female former Marine fighter pilot, Amy McGrath, in a snub to the party establishment for a U.S. House seat district that Democrats hope to put into play. The Democratic Congressional Campaign Committee (DCCC) had promoted her opponent, Lexington Mayor Jim Gray, to take on U.S. Representative Andy Barr, the Republican incumbent, in November. Runoff contests in Texas also showed the potency of the record numbers of women running, especially on the Democratic ticket, in the first national election since Republican President Donald Trump won the White House in 2016. In Texas, two women backed by the national Democrats won the nomination for competitive House seats. Iraq war veteran Gina Ortiz Jones hopes to blaze a trail as a lesbian and Filipina-American in her bid to unseat Republican Congressman Will Hurd. Lawyer Lizzie Pannill Fletcher won the party’s nomination to challenge Republican U.S. Representative John Culberson in Houston’s affluent suburbs. She beat Laura Moser, a progressive previously targeted by opposition research by the DCCC. Also in Texas, Democrats nominated Lupe Valdez to run against Republican Governor Greg Abbott. A Latina and former sheriff, Valdez is seen as a long-shot in the conservative state to become the first openly lesbian governor in the country. In Georgia, history was already being written as Abrams became the first black female in the United States to win a major party’s nomination for governor, according to the Gender Watch project, a nonpartisan group tracking elections. “Our state’s rich and complicated history courses through our memories on nights like tonight, when the unexpected becomes the truth,” Abrams told supporters, recalling Georgia’s place in the civil rights movement. In the contest for an open seat, Abrams aims to turn a Republican-controlled state by mobilizing black voters - a strongly Democratic demographic group that often skips off-year elections - to form a winning coalition with white progressives. Abrams defeated Stacey Evans, a white candidate who argued Democrats could not win without also persuading white moderate voters who can swing between parties.