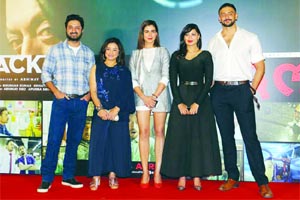 The makers of Blackmail have launched the films third song ‘Badla’ at a venue in the suburbs of western Mumbai. Producers Bhushan Kumar and Apurba Sengupta, director Abhinay Deo, Kirti Kulhari, Arunodoy Singh, Divya Dutta, Pradhuman Singh and Anuja Sathe were present at the launch. The song was shown to the audience and media present at the venue and it was loved by everyone. ‘Badla’ song showcases the hidden anger of Irrfan’s character. The song features Irrfan Khan along with singer-music composer Amit Trivedi and rapper Divine. The song is touted to be the revenge anthem of the year. Speaking about the film director Abhinay Deo shared,”I think Black comedy or quirky comedy is a part of all our lives. We just don’t see this aspect enough in our films. If we look into our life or view our neighbor’s lives, dark comedy is unfolding everywhere. I think the time has come, where we can project this to the audience, to present it in a manner to the viewers that they get entertained. Not that dark stands for only serious concepts, that’s not the case. Dark comedy also stands for the unexpected circumstances in life, honestly, the reality is stranger than fiction and that is so true. Because what is happening in reality, if we only open the papers and read all the things happen in the society be it politics, life or any section, our lives lead to very unexpected circumstances. This aspect of our lives is something that we are trying to bring forward for our viewers.” Produced by T-Series’ Bhushan Kumar and RDP Motion Pictures’ Abhinay Deo,Blackmail, directed by Abhinay Deo, is slated to release on April 6, 2018.