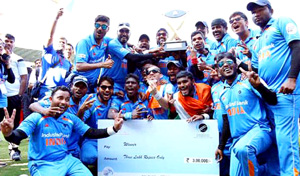 Dubai, The Ajay Reddy-led India cricket team defeated arch-rivals Pakistan by two wickets in the summit clash of the Blind Cricket World Cup to retain the title. Winning the toss, India invited Pakistan to bat first, who put up a decent total of 308 runs on board in the alloted 40 overs. In reply, India hunted down the target in 38.2 overs losing eight wickets. The men in blue had already beaten Pakistan by seven wickets in the group stage.