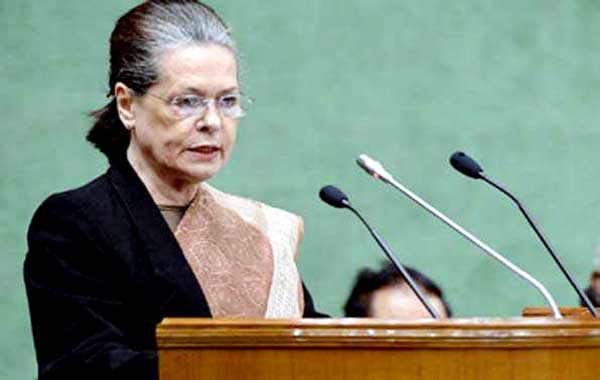 New Delhi, Accusing the Narendra Modi government of dealing a "systematic assault" on the foundations of India's democratic and secular republic, chairperson of the Congress Parliamentary party Sonia Gandhi on Monday said bluff, bluster and intimidation have been the governance philosophy of this government. Addressing a meeting of the Congress Parliamentary party on Parliament premises, Ms Gandhi said that the Narendra Modi government had betrayed the mandate given to them by people in 2014 which she said was obtained by deceit and dishonesty, by misleading the people. 'The last five years have been a time of unprecedented economic stress and social strain for our country. The very foundations of our democratic republic, of our secular republic have come under systematic assault by the Modi government. The very values, principles and provisions of our Constitution have come under continued attack by the Modi government. Institutions have been subverted. Political opponents have been hounded. Dissent has been suppressed. Freedom of speech - the most basic of all freedoms - has been sought to be curtailed and silenced. People with opinions different from the ruling establishment have been victimised. There is an all-pervasive atmosphere of fear and strife across the country. Bluff, bluster and intimidation have been the governance philosophy of the Modi government. Truth and transparency have been brazenly tossed aside,' Ms Gandhi said. 'There is now near-universal recognition that the mandate of 2014 has been betrayed. I look upon this slightly differently. That mandate itself was obtained by deceit and dishonesty, by misleading the people. It was inevitable that it would be found out and exposed sooner or later. That is exactly what has happened,' she said.