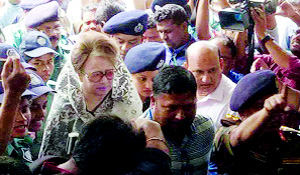 Agencies, Dhaka BNP Chairperson Khaleda Zia, who is currently serving jail term in graft case, has been further shown arrested in a case pertaining to Comilla Chuddogram bus petrol bombing that claimed eight lives. Comilla district Senior Chief Judicial Magistrate Md Mostayeen Billal made the decision on Sunday in response to a state petition. Khaleda Zia’s lawyers have petitioned for bail in the Comilla case and the court has set Tuesday to hear the bail petition. The former prime minister has been in prison for two months since the High Court sentenced her to five years in jail in the Zia Orphanage Trust graft case on February 8. Though the High Court had granted her bail, the Appellate Division stayed the bail until May 8 at the request of the Anti-Corruption Commission and the state. Now, following the shown arrest, she will also have to secure bail in the Comilla case before she is released. Eight people were killed in the arson attack on a bus in Comilla’s Chauddagram during protests by the alliance of BNP and Jamaat-e- Islami on Feb 3, 2015. Two cases were started over the incident one for the killings and the other for the use of explosives. Police named Khaleda as the instigator of the attack in the murder case, which also accused 76 others. On March 12 of this year court police Inspector Subrata Banerjee filed a petition seeking to show the BNP chief arrested in the case. The court took cognisance of his petition and ordered the prison authorities to produce Khaleda in the court on March 28. She was not brought to court on March 28 and the court ordered prison authorities to provide an explanation as to why. The next hearing was set for April 8. Prison authorities explained to the court on Sunday that the BNP leader had not been brought to the court due to her poor health. Khaleda’s lawyer Quayyum-ul Haq Rinku said the court had set April 10 for the bail hearing.