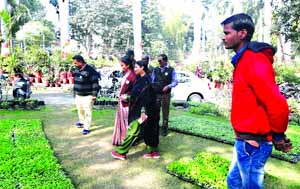 Agencies, Jakarta Rescuers have been searching for the 17 crew of a cargo boat which sank in the waters off Sulawesi province, Indonesia, head of the search and rescue office in the provincial capital Basrano said on Wednesday. The incident took place on Saturday, but was known on Tuesday after one of the crew was rescued alive by an Indian ship NV Nurbayaksar, the crew member named Yakob informed about the incident, head of the office revealed. The cargo boat with 18 people onboard, all of them were crew members, went down after leaving a seaport in Bitung town of nearby North Sulawesi province, Basrano said. The boat was heading to Marowali town in Central Sulawesi province and sank in the waters off the province after being stricken by huge waves during poor weather condition, he said. A search and rescue operation was immediately conducted after the office got the information from the rescued crew, he said. "We have dispatched our personnel since Tuesday in a ship to find out the missing crews," said Basrano.