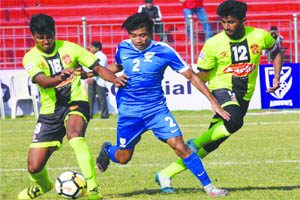 Agencies, Kolkata Bottom rank Gokulam Kerala stunned stumbling Mohun Bagan 2-1 with a late goal from Henry Kisseka and virtually ended diminishing Kolkata club’s hope to come back for title at last home in I-League here today. Mahmood Al Ajmi scored the opening goal for the visitors at Salt Lake stadium while Aser Dipanda netted the consolation goal for the home side. Henry Kisekka scored the winning goal for Gokulam in the 90th minute from Mudde Musa’s pass. The move started with Provat Lakra’s throw-in which Musa received. The midfielder sent a through ball for Kisekka whose brilliant touch inside the box gave him time and space for a sensational volley into the net. The stunning winner crushed Bagan’s hopes of a title challenge and helped Gokulam Kerala off the bottom of the standings. While Bagan have now 21 points from 14 games, eight points less than the league topper Minerva Punjab ( 13 plays 29 points) and Gokulam Kerala have 13 points from as many games. The first 20 minutes of the match saw Gokulam dominating proceedings. Daniel Addo attempted a shot at goal in the 10 minute of the match from the edge of the box but the ball flew over the crossbar. Mahmood Al Ajmi came close to scoring a goal at the stroke of half-time from Salman K’s cross as he tried to chip the ball over Shilton Paul. The Mohun Bagan custodian did well to deny him.Sankarlal Chakraborty brought in Surchandra Singh in place of Raynier Fernandes in the beginning of second half to consolidate the central midfield position. Mohun Bagan striker Akram Moghrabi single-handedly missed three chances within first 20 minutes of the second half. He failed to push the ball into an empty net in the 63rd minute from Arijit Bagui’s square pass. Bagui went past Provat Lakra on the right flank and squared the ball in front of the goal. Akram’s tap-in was initially saved by Bilal Khan and his second attempt hit the bar and went out. It was undoubtedly the easiest chance of the day. Nepalese wonder kid Bimal Magar was introduced in the 65th minute to replace Akram who had a terrible day at the office. Mahmood Al Ajmi broke the deadlock for the visitors in the 76th minute from Henry Kisekka’s assist. The new recruits combined well as Kisekka chested a long ball, took a touch and squared the ball for his partner. The Bahraini forward slotted the ball home comfortably. It took Mohun Bagan only a minute to equalise. Top scorer Aser Dipanda scored the equaliser from Bimal Magar’s assist. Shilton D’Silva sent a long ball inside the box for Magar who headed the ball towards Dipanda and the Cameroonian found the back of the net to restore parity. Sankarlal Chakraborty made just one change in the Mohun Bagan starting XI. SK. Faiaz replaced Azharuddin Mallick on the left flank. Bino George made four changes to the Gokulam starting line up. Santu Singh, Mohammad Dibbin, Arjun Jayaraj and Ladampuia were replaced by Provat Lakra, Daniel Addo, Mohammad Rashid and Kivi Zhimoni. George fielded his team in a 4-4-2 shape with Mahmood Al Ajmi partnering Henry Kisekka upfront. Central midfielder Mohamed Rashid started as the right-back.