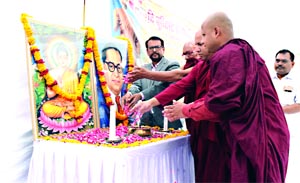 Chronicle Reporter, Bhopal Buddha Jayanti was celebrated with religious fervour in the city on Monday. People from all walks of life celebrated the Buddha Jayanti. Devotees thronged the Buddha Mandirs in the city. Devotees lit candles and incense sticks, prayed and offered sweets and fruits before the statue of Gautama Buddha. Sermons on the life and teachings of Buddha were delivered by the bhikshus (monks), which were attended by followers in larger numbers. Large number of people waited patiently for their turn to partake in ‘khichdi prasad’, prepared of rice, lentil and mixed vegetables, at the Buddha Mandirs. A procession through the main thoroughfares of the city marked the beginning of the celebration of Buddha Jayanti.

The Buddhabhoomi Dhammadoot Sangh organized a programme at 6 pm at the world’s smallest Buddha idol. Later ‘Mahaparitran Path’ was organized by Bauddha Bhikshus (monks). Later at 8 pm a cultural programme based on the life and philosophy of Lord Buddha was organized. The preachers said Lord Buddha preached non-violence, equal love and universal brotherhood. Let all of us faithfully follow his teachings, which is for love for all, hate for none and non-violence as a way of life, they said. The priests expressed hope that the festival would spread the Buddha’s message of love, peace and compassion. Gautama Buddha is a friend to each and every human being on earth, they said. On the other hand, several other Buddha shrines and temples in the city drew hundreds of people who paid homage to the Buddha. People remembered Gautam Buddha for his great deeds and words. They said that Buddha should be a source of inspiration for every human being. They said that Buddha’s teaching of non-violence had become more relevant in today’s world that is battling violence and terrorism.