Bullet train project to be fully operational on 2023: Rly Chairman 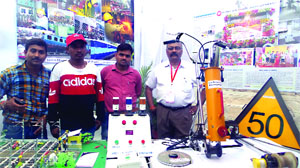 Agencies, Bhopal Railway Board Chairman Ashwani Lohani today assured that the ambitious bullet train project would be made fully operational by 2023. “The project would be operational in certain sections from 2022. Nonetheless, it would be completely operational from 2023,” said Mr Lohani here. He was replying to a media query during a press conference organised on the sidelines of the three-day exhibition of the Railways to observe the 63rd Railway Week. Replying to a query, he admitted that punctuality of trains has suffered in recent times because the Railways has focussed a lot on safety and maintenance. “A lot of emphasis is being laid on infrastructure. Railways is working overtime to fill the infrastructure gap. Its benefits would certainly be reaped in future,” said Mr Lohani. Elaborating about the exhibition, he said that the exhibition’s objective is to inform public about Railways. “Railways is big organisation. It has a large network. Lot of work happens in behind scenes. Nonetheless, common man’s acquaintance to trains is limited to trains. There is a huge organisation behind it. The exhibition is showcasing new developments in the Railways as well,” said Mr Lohani.