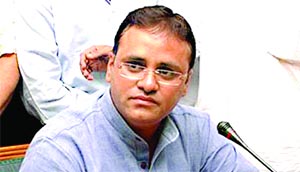 Chronicle Reporter, Bhopal State Congress President Arun Yadav has said that the BJP ministers are luring and even threatening the voters. Yadav said the BJP leaders are acting immorally.Yadav said this while campaigning for the party at Kolaras and Mungawali. He addressed a number of public meetings on Tuesday. Yadav said during the last 14 years the government did not care for Kolaras, Saharia tribals and development but is caring for them suddenly on account of elections. Meanwhile the campaigning by both Congress and BJP leaders has reached crescendo as date of polling is drawing closer. A modern ‘rath’ and a bullock cart are among the preferred modes of transport for top Madhya Pradesh leaders to campaign in the run-up to the February 24 by-polls in Mungawali and Shivpuri Assembly constituencies. Both the ruling Bharatiya Janata Party and the opposition Congress have put their all in the campaigning for the by-elections, which come ahead of the Assembly polls this year. While Chief Minister Shivraj Singh Chouhan prefers helicopter rides to move to different places for campaigning, he is using a ‘rath’, which actually is a modified bus with a lift that changes into a makeshift dias on the rooftop, from which he addresses the electorate during campaigning for the bypolls. On the other hand, erstwhile royal and Madhya Pradesh Congress leader Jyotiraditya Scindia was seen trying to connect to the common man by riding a bullock cart while on the way to Barkheda Dang area to address a public rally. Speaking to Sahariya tribals in Aaron village in the constituency, Scindia said those who had not even given a nail to ensure the development of the area were now roaming the streets to canvass votes. The by-polls in the two segments were necessitated by the demise of sitting Congress MLAs. Counting of votes will be taken up on February 28.

Bhopal: Ahead of assembly by-election in Mungaoli scheduled to take place on February 24, the Election Commission of India (ECI) has issued directives to remove Ashoknagar Collector BS Jamod. A senior ECI official told UNI over telephone that the directives were issued last night. The decision comes in the wake of the principal-opposition Congress lodging a complaint with the ECI over irregularities in the voters’ list in Mungaoli. Meanwhile, the Congress has lodged another complaint with the ECI over Shivpuri Collector Tarun Rathi providing clean chit to Sports and Youth Welfare Minister Yashodhara Raje Scindia in connection with a matter related to the alleged violation of the Model Code of Conduct by her.