By riding on the shoulders of BSP, SP is doing politics indirectly 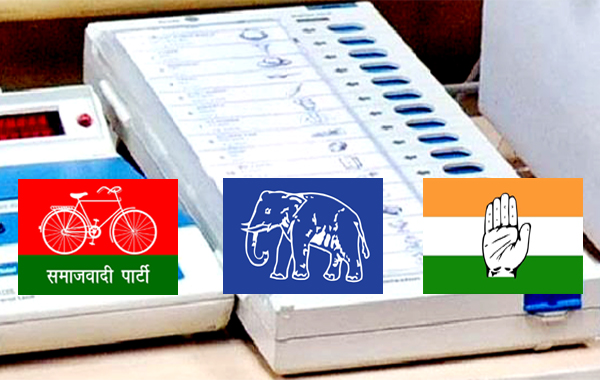 Without Congress SP will not get anything Pravesh Kumar Mishra New Delhi: To deal for assembly elections, Samajwadi Party has formed a strategy to pressurize Congress by forwarding Bahujan samaj Party ahead. As SP is aware of its strength and it is playing a game which Kill the snake as well as save the stick. That is why SP is riding on the shoulders of BSP and does not targeting Congress directly on any front. Experts believe that SP has got an idea of its strength in the current political atmosphere. Because of the local organizational pressure it is showing off its preparation, but party is aware that without Congress support it will not going to get anything. As many factions are active in SP now days they are being going in different directions from time to time. Party’s senior most leaders Mulayam Singh Yadav gives different statement and party’s chairman Akhilesh Yadav have different opinion on the same issue. Not only this, Akhilesh Yadav’s uncles have their own political directions. In such SP understands that if it deals with congress alone than Congress will not give it more than its status. Because of this reason BSP strategists are trying to ride on the shoulders of BSP to incline Congress. Experts believe that SP is trying to hide its weakness by bringing Uttar Pradesh’s politics again and again in between the conversations for the alliance in the assembly elections of Madhya Pradesh. It is trying that in any condition Congress should incline on BSP’s stubbornness and then the way will opens on its own for SP. Experts believe that by any means Akhilesh does not want to show any signal of stubbornness in front of Rahul Gandhi. Therefore, in the informal conversation in the context of the alliance, he is always saying to have the conclusive talks with BSP then the SP will take its right whereas Congress experts, understanding this move of SP, are pressurizing to have conversations with BSP and SP together. One of the Congress’s senior leaders says that Sp should tests its strength first and then it should ride on another’s shoulder or apply face to face strategy. Congress has been now fade up of constantly breaking talks so it will soon either will go for alliance with BSP and SP together or will open the front alone by taking decisive decision.