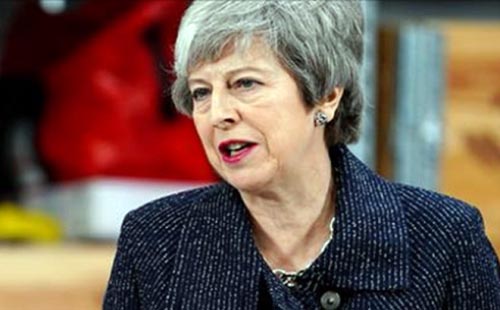 London, The cabinet has agreed Theresa May's plan for her Withdrawal Agreement Bill, including compromises intended to attract the support of Labour MPs. According to a BBC News report, it includes the idea of a temporary customs relationship until the next general election, and measures on the environment and workers' rights.The bill will be put to a vote in early June, and if it fails, the PM is likely to come under intense pressure to quit. She will give a speech on the latest developments at 16:00 BST. BBC political editor Laura Kuenssberg said MPs and ministers who were not at cabinet would be briefed before the PM's speech, entitled "A new Brexit deal - seeking common ground in Parliament". The Withdrawal Agreement Bill is legislation required to bring the withdrawal agreement negotiated with the EU into British law. MPs have rejected the withdrawal agreement three times, and talks with Labour on finding a compromise deal acceptable to their MPs broke down last week. Downing Street said there was a "shared determination" in cabinet to find a way of passing the legislation although it conceded "strong opinions" had been aired on how best to do this. At the meeting, Mrs May told her ministers: "The Withdrawal Agreement Bill is the vehicle which gets the UK out of the EU and it is vital to find a way to get it over the line." No 10 said the bill, when it was published, would contain "some significant new aspects". International Development Secretary Rory Stewart suggested on Sunday that the government and Labour were "half an inch apart" on key issues and "sensible" Labour MPs could be won round. But shadow foreign secretary Emily Thornberry said she believed her colleagues would vote against the Withdrawal Agreement Bill as she had heard there was "no radical difference" in what was being offered. For Theresa May getting her cabinet behind her plan for another push towards a Brexit deal was the easy bit. Ministers agreed legislation to deliver Brexit should be the vehicle for compromises to bring enough Labour MPs on board to counteract the still strong rebellion by those on her own side. The plan supersedes the idea of so-called indicative votes in the Commons on Brexit options.