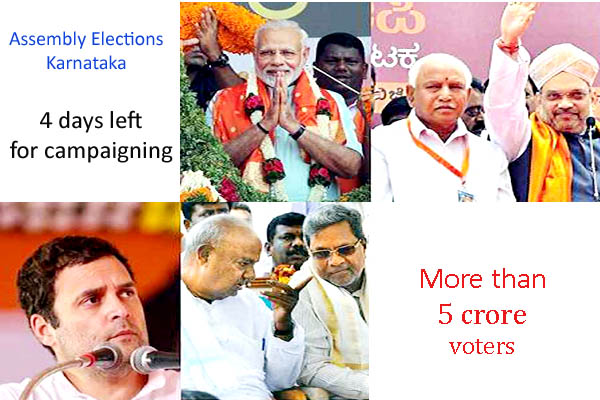 Bengaluru, With hardly four days left for campaign to end for the May 12 Assembly polls in Karnataka, the hi octane electioneering has reached the full crescendo with top leader from respective political parties crisscrossing the state making a last ditch attempt to woo the more than five crore voters With both Prime Minister Narendra Modi and party President Amit Shah bearing the brunt of the BJP attack, for the Congress Party president Rahul Gandhi and Chief Minister Siddaramaiah are trying to impress the voters, while for the Janata Dal (Secular) Party president and chief ministerial candidate H D Kumaraswamy is touring the state with former Prime Minister H D Devegowda, owing to his age was selective in his campaign. With Congress bashing being is main agenda, Mr Modi had attended nearly 14 meetings in four days of campaigning since May one and would be in the State for two more days from tomorrow for his final appeal to the voters, While Mr Rahul Gandhi had already commenced his last three days of campaign from Kolar and will concentrate on Bangalore and adjoining districts till May nine evening. Former Congress president Sonia Gandhi will visit Karnataka tomorrow and address her first election rally in nearly two years at Vijayapura. Incidentally, Prime Minister Narendra Modi will also speak at a public rally in the same district on the same day. Congress party has decided to go to the grass root level to organise and guide booth level workers for the last minute preparations ahead of May 12 polling. Polling would begin at 0700 hrs on the polling day in 223 constituencies having in all 2635 candidates. Polling has been countermanded in Jayanagar in the city following the sudden demise of BJP candidate B N Vijayakumar. BJP is in the fray in all the 223 constituencies followed by Congress in 221 and JD(S) in 200 constituencies. Counting would take place on May 15.