Campaign to continue against those not wearing helmets 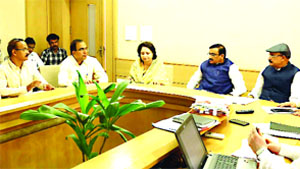 Chronicle Reporter, Bhopal Home Minister Bhupendra Singh has said that a special campaign must be launched against riders of two-wheelers without helmets from safety point of view and they must be challaned. He instructed that that the drive must be continued in the rural areas also so that people become more alert towards use of helmets. Singh was presiding over the meeting of the State Road Safety Council at the Mantralaya today. Public Health and Family Welfare Minister Rustum Singh said at the meeting that traffic on roads are increasing every year. The spots where road accidents were becoming too frequent should be included in black spots and the places where accidents had lessened must be removed from the list of black spots. Urban Development and Housing Minister Smt. Maya Singh said that people should be made to strictly comply with the rules made for safety. It was told at the meeting that the number of road mishaps, deaths and injured in road mishaps in 21 districts in year 2017 has declined compared to year 2016. This year there is 3.49 percent decline in the number of accidents in the months of January-February compared to last year. Number of deaths during this period has also come down by 2.67 percent. Last year total 6 lakh 90 thousand 31 challans were issued and Rs 21 crore 81 lakh 58 thousand 340 mitigation fee has been recovered. The 29th Road Safety Week will be observed from April 23 to April 30 in Madhya Pradesh. Process of selection of land in Rajgarh Biaora is on for setting up Driver Training Research Institute in state. A District Road Safety Committee presided over by the Member of Parliament (Lok Sabha) has been constituted in every district. Regional Transport Officer/Assistant Regional Transport Officer of Transport Department from district headquarters has been made the Member Secretary. As many as 541 breath analyzers have been given in various districts of the state. Last year a fine of Rs 52 lakh 33 thousand 550 was recovered against challans issued to 13 thousand 134 vehicle drivers for drunken driving. Licenses of total 2610 drivers was suspended which includes 943 riders of two-wheelers whose licenses were suspended for drunken driving. In the last five years, training was imparted by Industrial Training Institute Indore, Eicher Training Institute, Pithampur and Bharat Petroleum, Indore to 65 thousand 186 commercial vehicle drivers. By fixing bus stands at Indore, Bhopal and Jabalpur city, the pressure of traffic inside the city has been reduced. It was told at the meeting that 8 M.P.R.R.D.A engineers have acquired training of road safety and audit in the training programme and training of 10 engineers has been proposed. Similarly 6 M.P.R.D.C officers have been trained and the names of 12 engineers have been proposed. As many as 50 engineers of Urban Administration Department will be sent for training. Programmes, workshops, seminars were organized in total 3096 schools and colleges in which total 5 lakh 29 thousand 588 students were imparted traffic related information by the traffic police in 51 districts of the state. As many as 19 thousand 931 awareness programmes are being run on Nagar Palika/ward level for road safety. It was informed that the actual number of black spots after their physical verification and investigations has now reduced to 616. Trauma centres are running in 38 districts of the state. There is possibility of trauma centres being set up in 11 districts this year. In the remaining two districts of Indore and Mandsaur, new buildings are to be constructed for trauma centres. The meeting was attended by senior officers from various departments including Additional Chief Secretary K.K. Singh, Director General of Police Rishi Kumar Shukla, Commissioner Transport Shailendra Shrivastava and Additional Director General of Police Vijay Kataria. Home Minister Singh presides over Rajya Sainik Board meeting. The 19th meeting of the Rajya Sainik Board was held under the chairmanship of Home Minister Bhupendra Singh at the Mantralaya. Discussion was held on various points related to welfare of servicemen during the meeting. Additional Chief Secretary Home K.K. Singh was also present during the meeting.