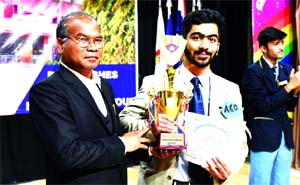 Chronicle Reporter, Bhopal “We All Have Time Machines, Some Take Us Back They Are Called “Memories” And Some Take Us Forward They Are Called “Dreams”, by this teary-eyed quote in mind, The students, staff and management of Campion School, Arera Colony Bhopal bid farewell to the outgoing students of XII Std. The official farewell was organised by class XI students, who gave their best wishes to their seniors. The school bids adieu to class XII students today. A prayer song, followed by their thought provoking speeches, recollecting the memories and the time spent by their seniors in the school and bidding farewell to them with a heavy heart, but with a hope that they fair well in life left everyone teary-eyed. The Programme started in the “Loyola Auditorium” with Prayer by Superior Fr. Christdhari Kujur S.J., After this “Lighting of the Lamp” done by the Principal Fr. Dr. Athnas Lakra S.J., Vice Principal Fr. Ajay Kumar Kerketta S.J., Superior Fr. Christdhari Kujur S.J., Fr. Ashok S.J., along with Senior Most Teacher Mrs. Lethika Laxmanan, Mrs. Neetu Dongre and Staff Secretary Mrs. Neetu Dongre mam. Thereafter Staff showered petals to wish the students of class XII. The farewell party was celebrated with lot of fervour at School campus. It was an occasion for the outgoing students to look back at the time that they spent in the lawns of Campion Campus and the professional education that they acquired during the period. The Principal passed on the ‘light’ of wisdom to all the students of class XII. Class XI students presented foot taping dances and songs. A special cultural programme and different songs was organized by class XI students, in the “Loyola Auditorium”. The program got off to a start with a welcome song by the juniors in honour of the seniors. Thereafter, there was a spate of dance, music and laughter as the hosts impressed with the showcasing of their vast repository of skills. Modelling was also done by the juniors and seniors. The pick of the day was the Bhangra event, where the juniors enthralled the gathering with their rhythmic dance steps. The girls-squad lead the pack of western dances giving a fast beat to the whole show. Cultural event commenced with Prayer Song followed by power packed dance performance of XI Std. which was full of feelings and emotions for their departing seniors. After all the fun and frolic, the juniors came one by one on the dais and thanked their seniors for all their guidance and affection. All the outgoing students came up on the stage to perform individually. Entire aura became more sentimental when seniors shared his experiences of school-days and the last day. Felicitation to the students of XII Std. was the most awaited event and it was quite difficult to choose only one for each category. Boys were looking handsome and elegant in their Suits. On the basis of different rounds they were given different titles. The Afternoon saw the crowning of Mr. Creative award given to “Rohan Verma” and fist Runner up is “Avi Khare” and second runner up is “Mohd. Irtiza Sheikh”. Mr. Courteous award goes to “Aman Kshirsagar”, Nehar Singh Bisen” and “Anshul Verma” respectively. Mr. Consistent award goes to “Japman Singh Monga”, “Anish Anand Dixit” and “Devanshu Maheshwari”. Mr. Creative Award was accorded to “Saad Hashmi” & “Triambak Goyal” One of the most awaited and curious award of Mr. Symbol of Simplicity award goes to “Pratit Nihar Ekka” and “Navneet Dixit”. The function was full of enthusiasm. It helped to create warm environment between juniors and seniors. Seniors shared their experiences with juniors. “Aman Shrivastava”,”Saksham Gaur”, “Jitendra Sahu” and Swapnil Chandel” are adjudged the “Ever ready To Help” students. Mr. Regular Students of the award goes to “Ghanshyam Raut”, “Austin Toms” and Abhishek Singh Chaurasia”.The most awaited award of Mr. Campion goes to “Satvik Pathak”. He was adjudged Mr. Campion. Principal Fr. Dr. Athnas Lakra S.J., in his speech said “We foster academic excellence in a progressive school environment which is safe and caring. A child spends most of his time in school and every minute spent there has a bearing on his personality and character. Students become the most important asset of the school, without them, schools and teachers are nothing. However, it is also true that a student is nothing or incomplete without a good teacher. So, both are equally responsible for each other’s significance. We cannot say that only teachers play great role in the student’s life alone, however; students also play great role in making the value and importance of teachers. Both needs equal participation in shaping the students career. He wished all the best to the outgoing students for success and accomplishments in all their future endeavours.