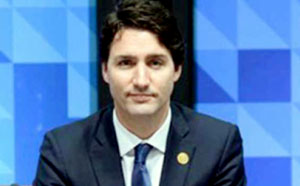 Agencies, Montreal/Riyadh, Canadian Prime Minister Justin Trudeau on Wednesday said he would keep pressing Saudi Arabia on civil liberties amid a major diplomatic dispute but also offered an apparent olive branch, saying the kingdom had made some progress on human rights. Saudi Arabian Foreign Minister Adel al-Jubeir - infuriated by Canada’s demand last week that jailed rights activists be released immediately - said earlier on Wednesday that there was no room for mediation, adding that Ottawa knew what it needed to do to “fix its big mistake.” Riyadh on Sunday froze new trade with Canada and expelled the Canadian ambassador. It also ended state-backed educational and medical programmes in Canada. Trudeau - who referred to the matter as “a diplomatic difference of opinion” - told reporters in Montreal that Foreign Minister Chrystia Freeland had held a long conversation with her Saudi counterpart on Tuesday, but gave no details. “Diplomatic talks continue ... we don’t want to have poor relations with Saudi Arabia. It is a country that has great significance in the world, that is making progress in the area of human rights,” he said. “But we will continue underscoring challenges where and when they exist, in Saudi Arabia and elsewhere,” he continued. On Friday, Canada expressed concern over the arrests of activists in Saudi Arabia, including prominent women’s rights campaigner Samar Badawi. Her brother Raif Badawi, a prominent blogger, is serving a 10-year sentence and has been publicly flogged for expressing dissenting opinions online. His wife and children live in Canada and are Canadian citizens. A number of women’s rights activists, who campaigned for the right to drive and an end to the kingdom’s male guardianship system, have been targeted in a government crackdown in recent months.