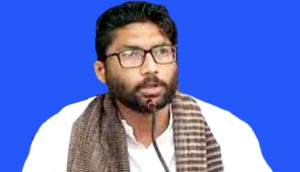 Chitradurga, Karnataka, A case has been registered in town police station against against Dalit leader Congress supported Gujarat MLA Jignesh Mewani for allegedly making provocative remarks during his interaction meeting held in this central Karnataka town on Friday. The complaint was filed by T Jayanth, an district level officer who is part of flying squad appointed to oversee the election process. In his complaint he alleged that Mr Mewani had made instigating remarks against Prime Minister Narendra Modi during the interaction meeting on Friday evening. Mr Mewani, coming down heavily on Mr Modi for going back on his promises like creating two crore jobs per annum, he had reportedly asked the people of Karnataka to raise violent protests against Modi, whenever he makes election speeches in Karnataka, and ‘throw chairs at him’. If Mr Modi cannot fulfill his promises let him go to Ram Mandir in Himalayas and chant bhajans rather than continuing as the Prime minister, Mewani reportedly told the gathering. Cases were registered under IPC sections 153, 188 117 and 34 for 'inciting people to foment disturbance' when Modi addresses a public rally in Bengaluru likely to be held on April 15 ahead of the May 12 assembly polls.