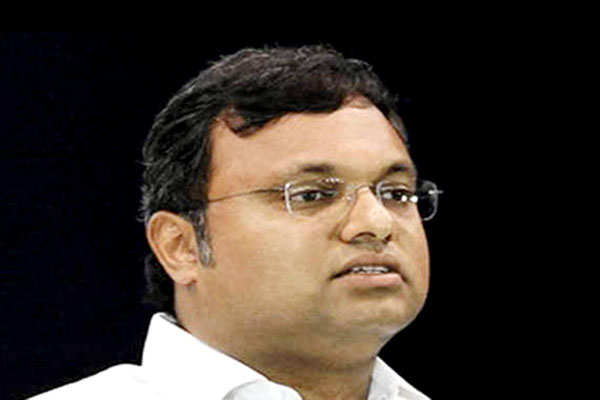 New Delhi, CBI Special Court, after hearing the plea of CBI, on Friday extended the CBI custody of Karti Chidambaram, son of former union minister P Chidambaram, till March 12. Karti was arrested by Central Bureau of Investigation (CBI) on February 28 at Chennai Airport on his return from London in connection with the INX media money laundering case. It was also alleged that Karti was not cooperating with the investigating agency. CBI had registered a case agains him in May 2017 for the alleged irregularities in Foreign Investment Promotion Board (FIPB) clearance to INX Media, criminal conspiracy and cheating etc. It is further submitted that INX Media received overseas funds to the tune of Rs 305-crore in 2007 when Karti’s father P Chidambaram was the Finance Minister. Besides, Directorate of Enforcement (ED) had registered a money laundering case against Karti in May 2017 for his role in facilitating clearance from the Foreign Investment Promotion Board (FIPB) for INX Media Ltd and its Directors, Peter and Indrani Mukerjea both accused in the murder of Sheena Bora and others. Directorate of Enforcement arrested Karti’s chartered accountant S Bhaskararaman in the case under provisions of the Prevention of Money Laundering Act (PMLA). It is submitted by the ED that during the course of the investigation, it was revealed that Bhaskararaman had been assisting Karti to manage his “ill-gotten wealth” in India and abroad.Counsel for CBI submitted before the court that further custody of Karti was necessary. CBI submitted to the court that further custody was required for unearthing the "total conspiracy" hatched in the case and during the probe new revelations have come up so custodial interrogation was necessary to confront him with the new facts. CBI submitted before the court that evidence has been tampered in the case.CBI has submitted before the court that new incriminating materials have been found and Karti has to be confronted with them and a CD and documents were recovered in connection with the case which needed to be sent to Central Forensic Science Laboratory for examination. CBI has sought Karti's custody for six more days by submitting before the court to confront Karti with his Chartered Accountant S Bhaskararaman and further submitted to allow the CBI to bring Indrani and Peter Mukherjea to Delhi and identify the places where they met Karti Chidambaram. Counsel for Karti opposed the further custodial remand of Karti and sought bail by submitting before the court that there was no reason to hold him in custody.