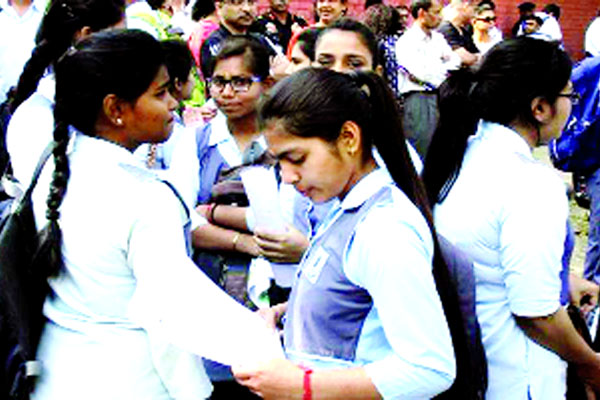 Agencies, New Delhi The police said Vicky, who runs a coaching centre at Old Rajinder Nagar for Maths and Science subjects, has been detained for his alleged role in circulating the leaked papers of classes 10 and 12. “The CBSE officials received a complaint via fax from an unknown person on March 23 that Vicky is involved in the leak of question papers,” said a police officer.The FIR, registered by the Crime Branch on the complaint of the Central Board of Secondary Education (CBSE), also mentioned Vicky’s name, the officer added. Vicky, sources say, is the owner of a Delhi-based Vidya Coaching Centre. Vicky has a Bachelors in Computers from the Delhi University, from which he passed out in 1996. Vicky was detained following a series of raids launched by the Delhi Police’s Crime Branch, which is investigating how the exam papers were leaked. The Delhi Police has formed a Special Investigation Team (SIT) to investigate the paper leak. Officials earlier said that initial investigation had suggested that the papers were leaked a day before the Class 10 mathematics examination. Yesterday, the CBSE, without explicitly admitting that the papers were leaked, announced retests for the Class 10 mathematics and Class 12 economics subjects. The fresh dates have not yet been announced. While the police have started conducting raids in Rohini, Dwarka and Rajindar Nagar, they have not refuted CBSE’s role in the alleged leak, the report added. The police said that it is “too early to say who the culprit is” and have also asked CBSE for the sequence of events. Meanwhile, students protesting at Jantar Mantar against CBSE paper leak said, “Either there should re-examinations of all subjects or else of neither.” ‘We want justice’ slogans being raised.

New Delhi: Reacting on the Central Board of Secondary Education (CBSE) paper leak, Congress President Rahul Gandhi accused the Rashtriya Swayamsewak Sangh (RSS) and the Bharatiya Janata Party (BJP) for destroying the institutions. Rahul took to Twitter and said, “The exam leaks destroy the hopes and futures of millions of students. The Congress always protected our institutions. This is what happens when institutions are destroyed by the RSS/BJP. Believe me when I say, this is only the beginning.” The Economics question paper of class XII and Maths question paper of class X were leaked on social media hours before the examination. The Economics exam was held on March 26 and Maths on March 28.

A group of students staged a protest against the CBSE question paper leaks at Jantar Mantar in Delhi on Thursday, demanding either a re-examination of all subjects or none at all. The Economics question paper of class XII, held on March 26 and Maths question paper of class X, held on March 28 were leaked on social media hours before the examination. Leveling allegations on the CBSE which suggested that more than one question paper was leaked, one protester said, “The CBSE should re-schedule all exams because multiple papers have been leaked, or just apprehend the ones involved and not hold any re-examinations at all, and what guarantee is there that the re-examination papers won’t be leaked. No CBSE official has been arrested yet, they might just leak it again.”