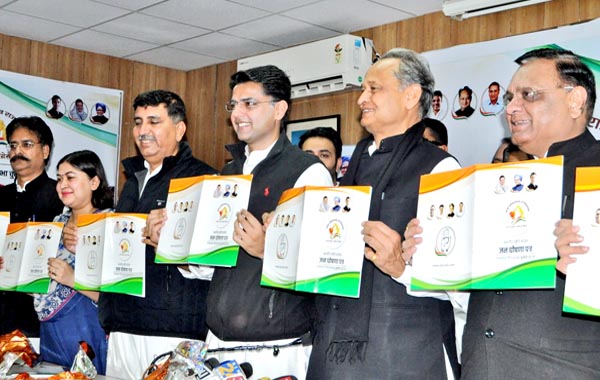 Hyderabad, Celebrations erupted at the office of Telangana Rashtra Samithi (TRS) here on Tuesday afternoon as the party continues to surge ahead in counting trends in Telangana Assembly elections, results for which will be declared by this evening. KCR's son and Caretaker Minister K T Rama won from Sicilla Assembly seat, while T Harish Rao, nephew of KCR, won with the highest majority of over one lakh votes from Siddipet seat. Dr M Sanjay Kumar and G Sayanna also won from Jagityal and Secunderabad Cantonment Assembly segments, respectively.Party leaders at the office said it is a one-sided war and KCR will be the CM again. Commenting on the TRS sweep in Telangana Assembly elections, MP and KCR's daughter K Kavitha sais the party is going to get a massive mandate.''We believe people of Telangana are with us. We have sincerely worked and utilised the opportunity given to us,'' she said. The MP claimed that her father's hard work has helped the party to win the polls.Party leader and Floor Leader in the Lok Sabha, AP Jithender Reddy said as expected, the TRS sweep in Telangana Assembly elections is because of the welfare schemes, initiated by the government and the people also accepted the same. According to party sources,Telangana Rashtra Samithi Legislature Party will hold a meeting in the evening on Tuesday, to elect KCR as its leader. Anticipating loss in the Telangana Assembly elections, held first time after the state was created by bifurcating Andhra Pradesh, Gandhi Bhavan, the state Congress party headquarters and its ally party TJS party office, are wearing a deserted look.