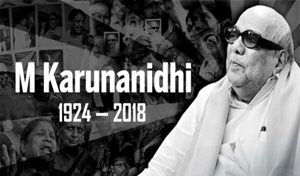 New Delhi, Celebrities from Indian cinema and sportpersons on Tuesday condoled the death of Dravida Munnetra Kazhagam (DMK) chief M Karunanidhi.DMK president and former Tamil Nadu Chief Minister M Karunanidhi passed away at a private hospital on Tuesday evening. Twitter is mourning the death of the veteran leader who was a five-time chief minister of Tamil Nadu. Condoling Karunanidhi’s death, actor-turned-politician Rajinikanth said,'Today, the day of my Kalaignar's death is a black day that I will never forget. May his soul rest in peace." Kamal Haasan who was in the national capital for News18 India 'Baithak' left the programme in between and is currently rushing to Chennai to pay his last respects to Kalaignar.Kamal Haasan paid homage to Karunanidhi and said “Karunanidhi was the teacher of all the actors”. He said “Karunanidhi has been a wonderful political career of 70 years. Kamal said that his mistake in politics and his success is a lesson for us.” Actor Riteish Deshmukh said,'Today India has lost one of its tallest leaders. Deeply saddened by the passing away of Kalaignar Karunanidhi ji. Deepest condolences to the family and loved ones. His contribution to the state of Tamil Nadu, its people has been immense. True Champion of Tamil pride. RIP Sir.' Tamilian actor Siddharth said,'The Last #Tamil Titan has fallen. Former TN CM #MKarunanidhi was an incomparable man. #TamilNadu has lost at once its greatest contemporary political and creative enigma. Our beautiful language #Tamil will miss #Kalaignar #Karunanidhi This void he has left will take ages to fill.' Film and television actress, Raadhika Sarathkumar said,'Dark day for us, my mind and heart is full of memories of this tall leader @kalaignar89 , man who instilled and strived for the pride of Tamils. His spirit will always live on, will miss him terribly. A tall and great leader gone, bid him a tearful adieu.' 'Tamilnadu and politics will never be the same again for me,' Raadhika said. Tamilian actress Hansika Motwani said,'With profound grief I have learnt about the loss of our beloved Kalaignar Dr M Karunanidhi one of the best leaders the country has ever witnessed. I hope God gives courage and hope to the family member and fellow Tamilians to cope with this huge loss #RIPKalaignar.' Actor Vishnu Vishal said,'End of an Era...RIP #KalaignarKarunanidhi.' Actor, filmmaker Kichcha Sudeepa said,'The country will always remember this Amazing personality and Leader ,,,Kalaignar Karunanidhi ji for his huge contribution to Tamil Nadu. RIP sir.' Former Indian cricketer Virender Sehwag said,'Condolences to the family and supporters of #Karunanidhi ji. May everyone maintain peace in Tamil Nadu.' Cricketer Mohammad Kaif said,'Deepest condolences to the family and loved ones of #Karunanidhi ji.' Ex-International Cricketer VVS Laxman said,'I convey my deepest condolences to family members and admirers of #Karunanidhi ji on his demise. RIP.' Cricketer Washington Sundar said,'Very sad to hear the demise of Kalaignar . RIP to the legend , fighter and a fantastic human being . Deepest condolences to his family and to all his friends and supporters all around the world #Karunanidhi.' Ninety four-year-old M karunanidhi was not only a politician, but was also an avid screenwriter and held sway in Tamil film industry for more than five decades. He was known for penning fiery dialogues that brought audience to the theatres in waves and his contributions to Tamil literature was well received having written stories, plays, novels, and a multiple-volume memoir. Mr Karunanidhi began his career as a screenwriter in the Tamil film industry and his fiery dialogues in the Sivaji Ganesan starrer 'Parasakthi', was still etched in the minds of the people of the State. Through his wit and oratorical skills, he rapidly rose as a popular politician and also as a script writer. He was famous for writing historical and social (reformist) stories which propagated the socialist and rationalist ideals of the Dravidian movement to which he belonged. He first used the medium of Tamil cinema to propagate his political ideas through the movie 'Parasakthi', which was billed as a turning point in Tamil cinema, as it espoused the ideologies of the Dravidian movement and also introduced two prominent actors of Tamil filmdom, Sivaji Ganesan and S S Rajendran. Karunanidhi was also known for his contributions to Tamil literature that included poems, letters, screenplays, novels, biographies, historical novels, stage-plays, dialogues and movie songs. He has written Kuraloviam for Thirukural, Tholkaappiya Poonga, Poompuhar, as well as many poems, essays and books.