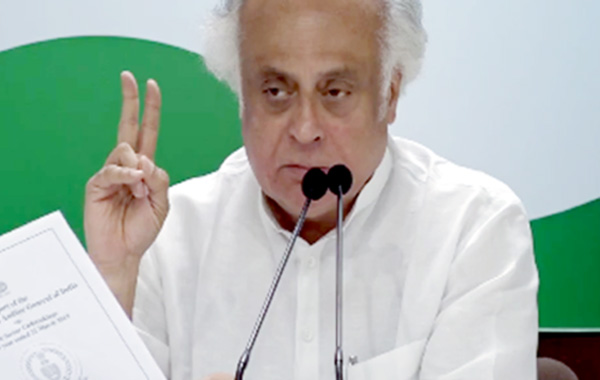 New Delhi, Attacking the Narendra Modi Government on the GSPC scam, the Congress on Monday alleged that the Prime Minister was trying to save the GSPC from being declared bankrupt by putting pressure on the State bank of India and challenging the circular issued by the Reserve bank of India. Talking to reporters here, AICC spokesperson Jairam Ramesh said in 2005, the then Gujarat Chief Minister Narendra Modi announced the ambitious project for gas exploration by the Gujarat state petroleum corporation with much fanfare. 'Subsequently, GSPC took loans of RS 20,000 crore from 15 banks. However, two reports by the Comptroller and auditor general which were presented in the Gujarat Assembly on March 31, 2015 and March 31, 2016 showed that no gas has been recovered by the GSPC till date. Also, till date, the GSPC has not repayed the loans taken from banks. ‘’In order to reduce the debt of the GSPC, the Modi government forced the Oil natural Gas corporation to buy a stake of Rs 8,000 cr in the GSPC which reduced its payable loans to Rs 12,000 crore. In February, 2018, the Reserve Bank of India issued a notification that if any company owes over Rs 2,000 crore to banks as on March 31, 2018, then it would be declared bankrupt in 180 days from that date. Today 180 days are ending and the GSPC has still not paid the Rs 12000 crore it owed to the banks. So as per the RBI circular, the GSPC will have to be declared bankrupt by the SBI before 1700 hrs today. However, the power companies have filed a petition in the Allahabad High Court against the RBI circular. When asked for its opinion by the court, the Centre filed an affidavit saying that it was not in agreement with the RBI circular. It also said that the RBI should increase the period after which a defaulter company would be declared bankrupt to 360 days. This is a clear attempt by the Central Government to save the GSPC,’’Mr Ramesh said. Alleging that the Central government was putting pressure on the SBI not to declare GSPC as Bankrupt as per its February, 2018 notification , Mr Ramesh said that it raised question marks on the intention of the Central government. ‘’Why is the Prime Minister silent on the matter. He has not said anything on the issue since 2005,’’he said. He also accused the Centre of making an attack on the autonomy of the Reserve bank of India by challenging its circular. ‘’The Central Government affidavit challenging the circular of the RBI is yet another attack on the autonomy of the institution after Demonetisation. It shows that the NDA Government wants to destroy institutions. If the circular is not implemented, then it means that the RBI has lost what little autonomy that it has,’’Mr Ramesh said. The Congress has claimed that the project of Gujarat State Petroleum Corporation (GSPC) for gas exploration on KG Basin Gas exploration, that was launched with much fanfare in 2005 by Mr Modi, the then Gujarat Chief Minister, caused a loss to the exchequer tune of Rs 20,000 crore as the GSPC had taken loans from banks to the tune of Rs 20,000 crore which have still not been repaid. They have also questioned as to why ONGC bought Rs 8,000 crore worth of shares in the GSPC, even though no gas has been found in GSPC's KG Basin block since 2005.