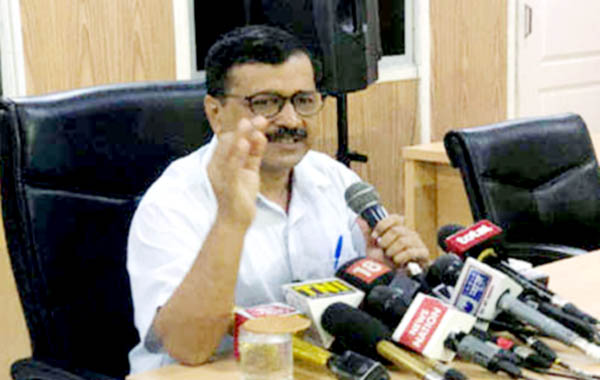 New Delhi, Chief Minister Arvind Kejriwal on Monday accused Centre of creating hurdles in the functioning of the Aam Aadmi Party (AAP) Government in Delhi. Addressing a news conference here, Mr Kejriwal said, ' We are being defamed through false charges.' He accused the Centre of trying to create roadblocks in the AAP Government's welfare schemes such as Mohalla clinics. He alleged that the Centre was adopting different ways to create hurdles in the work of the AAP Government through ACB, CBI and LG. "CBI reports directly to BJP president Amit Shah and Prime Minister Narendra Modi,' he alleged . 'Daily new cases are filed against the AAP Government with the purpose of defaming it and not allowing it to work,'he said. He alleged that all the cases which are filed against the AAP government ministers in CBI are through LG while cases are filed in ACB are on basis of complaints made by BJP leaders. 'The AAP government is providing cheaper electricity in Delhi. Why electricity is not cheaper in BJP ruled states such as Chhattisgarh, Maharashtra, Madhya Pradesh and Rajasthan,' he asked. The Chief Minister said he will meet LG this evening at 1730 hrs to discuss the issue of four month strike by IAS officers in Delhi and the Delhi government's doorstep delivery of ration scheme.