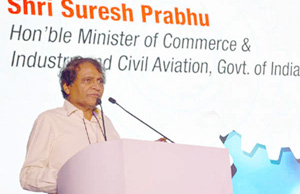 Chennai, Observing that the Centre would come out with a scheme on ease of doing business in districts and increasing its GDP by three per cent, Union Minister for Commerce and Industry and Civil Aviation Suresh Prabhu said on Thursday said Tamil Nadu was one of the few states which provide well developed infrastructure for industries. Speaking after inaugurating 'ACMEE-2018', the 13th International Machine Tools Exhibition here, he said the Union Government was working on a model project in this regard and once it succeeds it would be implemented in every district in the country. He said when industries were investing in India, they were also investing in States like Tamil Nadu giving more importance to the Centre-State partnership. While an industry was being set-up, it’s not just that industry or allied industry that develops, but the whole community around the industry would develop providing more employment opportunities, the Minister said. Stating that when an industry was investing in a State, it invests in a district, Mr Suresh Prabhu said in this context, developing the district infrastructure and easing the administration process in district becomes important. 'For this, the Union government is evolving two schemes--one is ease of doing business in district level and the other is increasing the GDP of the district by three per cent more than the normal GDP', he added. 'Regarding this, the Union Government is now working on the model project and once it is succeeded it will be implemented in every district in the country', Mr Suresh Prabhu said. He said at present, the fourth industrial revolution was taking place in which the information technology was getting infused with the industry, thus changing it into smart industry and smart technology. Thanking Prime Minister Narendra Modi for providing various schemes for small scale industries, he said the Centre has also created an e-portal through which the SMEs could sell their products. 'For making the industry successful, penetrating the international market is inevitable and for the first time in India, the Union government is working closely with the industries to promote the export of the products produced in India', he added.