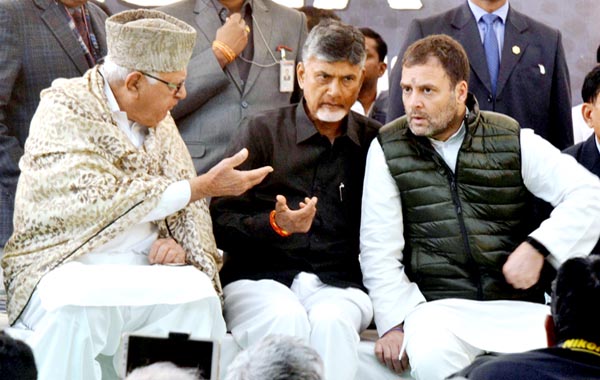 New Delhi, TDP chief and Andhra Pradesh Chief Minister N Chandrababu Naidu on Monday sat on a 12 hour long fast attacking the Modi government for not granting Special Category status to the bifurcated state. Mr Naidu is on 'Dharma Porata Deeksha' (protest for justice) at the Andhra Pradesh Bhavan here from 08:00 hours to 2000 hours, TDP leaders said. He will submit a memorandum to President Ram Nath Kovind on Tuesday, sources said. All TDP MPs, MLAs, state ministers and MLCs will also join the fast."Our battle will continue till we get the demands fulfilled. There are 19 important aspects in the provisions of bifurcation of the state. One of them is granting of Special Category Status. All demands have to be fulfilled," former Civil Aviation Minister Ashok Gajapathi Raju told agencies here. Among others National Conference stalwart Farooq Abdullah and NCP's Majeed Memon joined Mr Naidu and others at the day-long hunger strike by Andhra Pradesh CM at Andhra Bhavan here. The TDP MPs led by Mr Raju also staged a demonstration in front of Mahatma Gandhi statute in Parliament premises here.