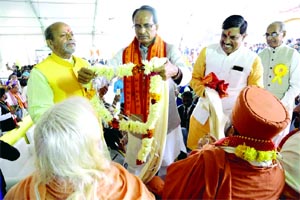 Chronicle Reporter, Bhopal Shankaracharya of Bhanpura Peeth Swami Shri Divyanand Teerth said that Lord Shiva is India’s Adi Dev. Only chanting Har Har Mahadev with a pure heart Swami can complete Shiv Upasana. Organizing the Shaiv Mahotsav in Ujjain is commendable as it will provide new direction to the world. Inaugurating the 3-day Shaiv Mahotsav Shankaracharya Swami Divyanand Teerth said that there is no other country like India that has got Gita and its pious messages. Earlier Shankaracharya Shri Divyanand Teerth, Dr. Mohanrao Bhagwat, Chief Minister Shivraj Singh Chouhan, Acharya Mahamandleshwar Vishwatmanand, Mahamandleshwar Vishokanandji, Mahamandleshwar Shri Bhavaninandan Yatiji, Mahamandleshwar Sabidanandji, Mahamandleshwar Brahmayoganandji and Mahamandleshwar Punyanandji Maharaj lit the lamp and inaugurated the Mahotsav. Mahotsav Organising Committee president and Simhastha Central Committee President Makhansingh was also present. Footprints of our culture found all over the world- Dr. Mohan Bhagwat The footprints of our culture can be found all over the world, said chief guest at the inaugural ceremony Dr. Mohan Bhagwat. Only India can be the country that becomes immortal after sipping poison. It is our duty to show the right path to the world. The first name of Shiva is Rudra and Rudra means Shakti. Without Shakti there is no sense of being Shiva. Rudra who destroys all evil powers is Shiva. We also will have to worship Shakti. Inner strength is also important along with physical strength. We shall have to make a sensitive society that is equipped with both physical and spiritual power. In the South it is okay to apply bhaboot even without taking bath. If one’s heart is pure, applying bhasm (Shiv’s symbol) can make one’s body and soul pure. Lord Shiva sits peacefully on an icy mount and completes his aradhana and looks at the world from up there. He said that one must have national and personal character like that of Shiva. For peace one does not have to wage a war. For this one must shed all selfish interests. It is our duty to understand Shiva. Samrat Vikramaditya had started Shaiv Mahotsav 2100 years back.The Shaiv Mahotsav starting today will continue to instill the inspiration of Shivatava in the common man. Dr. Bhagwat said that Bhagwan Ram connected North with South while Bhagwan Krishna linked East with West but Bhagwan Shiva is present all over India. Shiva is worshipped everywhere right from the Himalayas. Indian culture that teaches the art of living to the entire world is spread worldwide. He said that several years ago when he had been to Kenya, he happened to visit the Bhagwan Shiva Swayambhu Ling. Similarly he had Shiva darshan on the banks of Victoria Sarovar spread between Tanzania and Kenya. India will show the path of peace to the world-CM Chouhan Chief Minister Shivraj Singh Chouhan said that our Vedas came into existence when civilizations had not even evolved in developed countries of the world. India will show the path of peace to the world. He said that Lord Shiva resides not only in India but in every part of nature itself. We should continue the ancient tradition of Shaiv Mahotsav. The Mahotsav starting from Ujjain will go up to 12 Jyotirlingas. Lord Shiva’s worship does not involve much fanfare, just some bhasm is enough to adorn him and Bhang and Dhatura are his bhog. Chouhan said that Lord Shiva accept those persons who have been betrayed by the world. He became Neelkanth after he consumed poison that came out of Samudra Manthan. Lord Shiva is the only God who takes everyone with him and loves all equally. He gives the message of social harmony. Shaiv Mahotsav will also do the work of spreading the message of social harmony. If the world has to be saved, Indian culture has to be saved. Be it Shaiv Mahotsav or Ekatm Yatra, both give the message of connecting the society shedding all differences. Only Indian culture can tackle conflicts emerging in the world because our culture believes that all must live peacefully and in good health. The Chief Minister said that when he was asked in America what is India’s thought, he answered, “Satyamev Jayate” and “Vasudhaiv Kutumbakam”. Chouhan said that the government’s job is not just development but making people’s life also hence organise events like Narmada Seva Yatra, Ekatm Yatra and Shaiv Mahotsav are essential. Postal stamp released The Indian Postal Department released a postal stamp on the subject Shaiv Mahotsav-2018 in the presence of guests. On the occasion Rakesh Kumar, Sushri Priti Agarwal and BS Tomar of the Indian Post and Telegraph Department were also present. The department has also released a special cover on which there a picture of Mahakal Shikhar. Special 12 postcards have also been released on 12 jyotirlingas and a postal stamp of Mudra obtained as a memorial of the first Shaiv Utsav which has details of Shaiv Mahotsav in Brahmi script was also released by the guests. Mule conferred with Mahakaleshwar Ved Award The Mahakaleshwar Ved award for the year 2017 was conferred to Vedmurty Shri Durgadas Ambadas Mule of Maharashtra. Shri Mule was honoured with Rs one lakh cheque, Rajat patra and letter of citation by Dr. Mohan Bhagwat and Chief Minister Shivraj Singh Chouhan. Shri Mahakaleshwar temple management committee member Vibhash Upadhyaya said that born in Maharashtra Shri Mule has been honoured earlier also by Adarsh Vaidik Dhanpathi and other awards. He has taught more than 1200 students in his institute. He is publicizing Ved Pathshala and Ved Vidya since 1985. Earlier, the guests were welcomed by Chief Minister Chouhan, welcome committee president Shri Makhansingh Chouhan, Shri Mahakaleshwar management committee member Vibhash Upadhyay, Pradeep Pujari, Jagdish Shukla and Administrator Avdhesh Sharma. On the occasion MLA Dr. Mohan Yadav, UDA president Jagdish Agrawal, Shyam Bansal, administrative officer and elite citizens were present. The programme was conducted by Mayank Shukla. Seers and guests welcomed CM Chouhan welcomed the local seers and guests from 12 Jyotirlingas with garlands and coconuts.