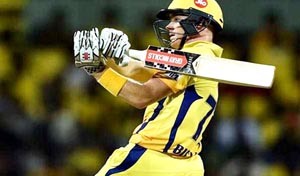 Chennai, Chennai Super Kings on Tuesday beat Kolkata Knight Riders by five wickets in the thrilling IPL match, Sam Billings's half-century helped CSR to win the match. Billings converted the ones into twos and waited for the right balls to hit into the stands. Before moving to pavillion, he ensured that CSK needed just 19 off 9 balls and that was all they required as Ravindra Jadeja finished it off with a six. Needing 17 off the last 6 balls, KKR pacer Vinay Kumar started horribly as he bowled a no-ball and the ball went for a six off Dwayne Bravo's bat. And that was not all as he then bowled a wide with Chennai needing 7 off 4 balls as that made it 6 off 4. After that, it was the Jadeja sign-off that had everyone in Chennai on their feet.Shane Watson, scored 42 with the help of three fours and three sixes in 19 balls, while Ambati Rayudu scored 39 runs in 26 balls with three fours and two sixes. The duo added 75 runs for the first wicket only in 5.5 overs.After the two batsmen got out, Chennai's pace slowed down. Captain Mahendra Singh Dhoni scored 25 runs in 28 balls but Billings scored two fours and five sixes in 23 balls and ensured victory for Chennai. Jadeja scored an unbeaten 11 and Dwayne Bravo scored an unbeaten 11 in five balls to give Chennai an exciting win. Chennai started really well with Shane Watson and Ambati Rayudu, thrassing Kolkata bowlers. Watson and Rayudu took Piyush Chawla out for special treatment. While his first over cost KKR 14, his second one cost 17. But Kolkata finally pulled it back with Tom Curran sending back Watson to pavillion for a 19-ball 42 as CSK ended the powerplay on 75/1 after 6 overs. Suresh Raina (14 off 12) failed to rise to the occasion as he has over the years. Earlier, it was a positive start for KKR too, after Dhoni won the toss and decided to bat. Sunil Narine started with 18 from the first over, later he was sent to pavillion by Harbhajan Singh. Chris Lynn though looked to up the ante with Robin Uthappa playing beautifully at the other end. He was looking to hit the big sixes even as Lynn rotated the strike. Russell scored one four and 11 sixes of just 36 balls. He took Kolkata Knight Riders to 200 runs in the last ball of the innings by hitting six. Kolkata lost their five wickets in 10 overs, but soon after that Russell changed the match's equation in the last 10 overs. Sunil Narine (12), Chris Lynn (22), Robin Uthappa (29), Nitish Rana (16) and Rinku Singh (2) were dismissed. Shane Watson took two wickets for 39 runs while Harbhajan Singh, Ravindra Jadeja and Shardul Thakur got one wicket each. Russell hit his country fellow Dwayne Bravo, who gave 50 runs in three overs.