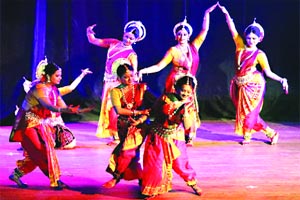 Chronicle Reporter, Bhopal A splendid performance of the Mayurbhanj Chhau dance at Shaheed Bhavan here on Sunday held the audience spellbound. Known for its powerful martial movements and the depiction of graceful femininity, Mayurbhanj Chhau is a highly energetic and colourful dance practiced in Odisha. The event marked the culmination of a Chhau Dance workshop that was held at Utkal Bhavan this month. The series of brilliant performances began with Saptrathi, wherein the artists showcased the Abhimanyu Vadh beautifully. The artists of Kirti Ballet and Performing Arts Troupe, Bhopal gave a dazzling performance. The dance performance was choreographed by Chhau experts from Orrisa Sunil Kumar Mahonto, Shivcharan Mohanto and Purn Chandra Mohanto. Besides, a single performance of Garud Vahaan was choreographed by Chandra Madhav Barik. Next the artists performed Garud Vahaan, which was followed with Shiva dance titled as ‘Mahadev.’ The artists with War dance left the audience mesmerized. The series of performances ended with Dhwaja Tamal. Chhau dance is found in three styles named after the location where they are performed, i.e. the Purulia Chau of Bengal, the Seraikella Chau of Jharkhand, and the Mayurbhanj Chau of Odisha. The dance ranges from celebrating martial arts, acrobatics and athletics performed in festive themes of a folk dance, to a structured dance with religious themes found in Shaivism, Shaktism and Vaishnavism. The costumes vary between the styles, with Purulia and Serakeilla using masks to identify the character. The stories enacted by Chhau dancers include those from the Hindu epics the Ramayana and the Mahabharata, the Puranas and other Indian literature. The dance is egalitarian and brings together people from diverse socio-economic backgrounds in a festive and religious spirit. The dancers presented the arrow practice of the Pandavas and narrated a short story of a fisherman through the dance drama. Further, the lighting effect was such that explains the expression of the scene. The use of red, green and blue light effect strengthened their performance and it was more like an opera performance.