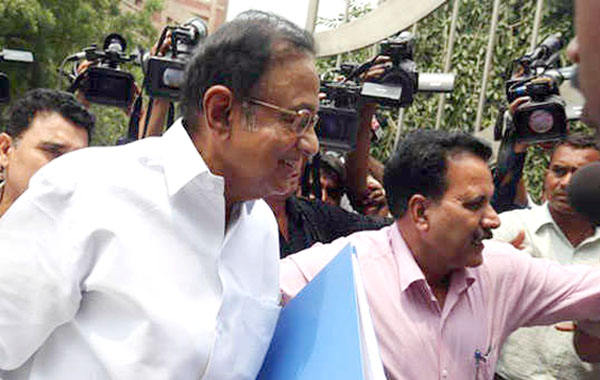 New Delhi, Former Union Minister and senior Congress leader P Chidambaram on Wednesday appeared before the Central Bureau of Investigation (CBI) for questioning in connection with the INX media case. "The former Finance Minister reached at the CBI headquarters here this morning. He was questioned for hours in INX media case," agency sources said here. On May 15, 2017, the probe agency had registered a case under section 120-B of IPC r/w 420 of IPC and Section 8, 13(2) r/w 13(1) of Prevention of Corruption Act, 1988 against INX Media (P) Ltd Mumbai through the then director Indrani Mukherjea and others; INX News (P) Ltd through the then director Peter Mukherjea and others; Karti P Chidambaram (son of P Chidambaram); unknown officials of Ministry of Finance and other unknown persons in this regard. It was alleged that two Media Companies were favoured through unauthorised downstream investment in said News Company without the approval of FIPB,ignoring the receipt of excess Foreign Direct Investment by said Media Company than the amount approved by the FIPB Unit of the Ministry of Finance. It was further alleged that as a consideration for such act, the media group paid money to the companies wherein the Director of Management Services based at Chennai had sustainable interest directly or indirectly.