Chief Economic Adviser resigns, to go back to US 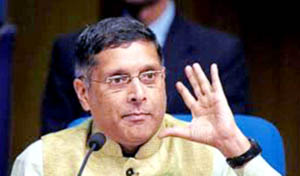 New Delhi, Chief Economic Adviser Arvind Subramanian has resigned from his post, Finance Minister Arun Jaitley announced in a Facebook post on Wednesday. Mr Jailtley said Subramanian has resigned on personal grounds. “On the expiry of the three year, I had requested him to continue for some more time. Even at that stage he told me that he was torn between family commitment and his current job which he considered the best and most fulfilling he has ever done,” he said in his post.  “He left me with no option but to agree with him,” Mr Jaitley added. Subramanian had joined as the Chief Economic Adviser in October, 2014 for a period of three years. In a tweet, Subramanian said that he was profoundly grateful and humbled by 'generous words' of Mr Jaitley and announcing his decision to return to US for research and writing. Mr Subramanian said that the CEA job was "most rewarding, fulfilling, exciting I have ever had.'