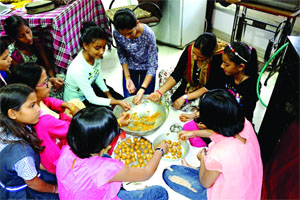 Chronicle Reporter, Bhopal Various organizations organized functions to mark National Science Day on February 28. Jawahar Bal Bhavan and Regional Science Center, Bhopal organized various events on the occasion. At Jawahar Bal Bhavan children participated in various events and competitions. Five day event was organised at Regional Science Center, Bhopal to mark National Science Day on February 28.The event was organised in collaboration with Madhya Pradesh Council of Science and Technology (MPCST). In the five day event, various educational activities and programmes were organised to mark the National Science Day. The event started from February 24. The day is celebrated on February 28 every year, to mark the discovery of Raman effect by Indian physicist Chandrashekhara Venkata Raman (CV Raman). The event was initiated with a drawing contest on February 24, during 11 am to 12.30 pm for high School and college students. On February 26, a scientific kit making workshop was conducted for the students in which 13 students from eight different institutes took part and fabricated 13 kits. On February 2, a Teaching Aid Demonstration Contest was organised in which 7 different teaching aids were demonstrated. On the concluding day, the programmes were initiated with an Open House Quiz which was followed by CV Raman Memorial Lecture by Ashok Gwal, Vice Chancellor, AISECT University, Bhopal. While addressing the event, Ashok explained the life and work of CV Raman. Later, the prize and certificates were distributed to the participants by Gwal and Prabal Roy, Project Coordinator of Science Centre.