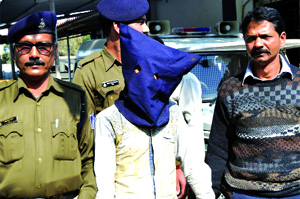 Chronicle Reporter, Bhopal There is anger and resentment among family members of the 8-year-old boy who was strangled to death on Monday. On Tuesday, when the child’s body was handed over to them after post-mortem at Hamidia Hospital, the child’s father, mother and grandmother burst into tears and were inconsolable. They said the accused must be hanged and warned they would punish the killer themselves if he were not hanged. A pall of gloom has descended Sant Hirdaram Nagar following the murder of Class-2 student of Christ Memorial School. The people said the accused killed the innocent child brutally and must get the harshest punishment. Police arrested a 19-year-old man for allegedly abducting and killing the eight-year-old son of his woman neighbour with whom he was having illicit relations, police said Tuesday. Police suspect that the accused, identified as Vishal Rupani, strangulated the boy to death after the relations between him and the woman turned sour over some reasons. Rupani was child’s home tutor and had illicit relation with his mother. Parasram Mahawar’s son Bharat (8) did not return home from school on Monday. When his family members failed to search him, a missing complaint was lodged. His body was found wrapped in a sack later. The boy was strangulated to death with a shoe lace. On the basis of suspicion of family members, Vishal Rupani (19) was detained. He was arrested last night. Vishal had threatened Bharat’s mother Savita three days ago. Accused developed illicit relations with child’s mother Vishal confessed that he developed illicit relations with Savita while he used to visit their house for teaching Bharat. When their relationship was discovered by their families, it led to estrangement between them. In order to take revenge, Vishal brought Bharat from his school to his office on his motorcycle and strangulated him with his shoe lace. Later, he put his body in a sack and dumped it. According to a police officer, the boy, a resident of Bairagarh locality, went missing while walking home from his school, located adjacent to Bairagarh. “His body was later found in a sack from the open land near Mubarakpur toll barrier booth on the outskirts of the city,” Bairagarh police station in-charge Sudhir Arjaria said. He said the police arrested Rupani after the boy’s family members suspected that he could be behind the abduction. “We arrested Vishal Rupani on charges of abduction and murder of the eight-year-old boy,” the police officer said. He said Rupani, who is unmarried, developed illicit relations with the mother of the boy whom he was giving tuitions for the last six months. “However, the relations between the duo turned sour recently over some differences,” Arjaria said. He said families of the woman and Rupani quarrelled recently after they came to know about the relations. He said Rupani has been booked under sections 302 (punishment for murder), 364 (kidnapping or abducting in order to murder) and 201 (causing disappearance of evidence of offence) of the IPC. During interrogation, Vishal said that he had brought the kid to the shop in Krishna complex in the afternoon. He remained in for around 27 minutes. He strangled the kid with shoe laces and stuffed boy in a sack. Later, he disposed off the body at Parvalia. The mother of the deceased has alleged that home tutor of the deceased who used to visit house for the past four months had threatened her to destroy her and her family after she had refused his sexual advances. The parents have alleged that it was negligence of the school as they have allowed the deceased to accompany with an unknown person. The parents and family members have also alleged that timely action by police could have save their son’s life, but the police did not take the complaint seriously. The auto rickshaw driver who picked and dropped the deceased failed to find him in the school and informed the parents and later when the family failed to trace the boy, a complaint was lodged with the Bairagarh police. Accused should be hanged, says child’s grandmother Deceased child Kartik’s grandmother Pushpa Bai said the accused should be hanged to death so that no other person may dare to commit such a heinous crime. She said the way Kartik was strangled to death has shocked not only her family but the people of Sant Nagar are deeply perturbed. Meanwhile Sant Nagar’s social body Pujya Sindhi Panchayat has condemned the child’s murder and has demanded to give exemplary punishment to the murdere. Panchayat functionaries has said all the residents of Sant nagar.