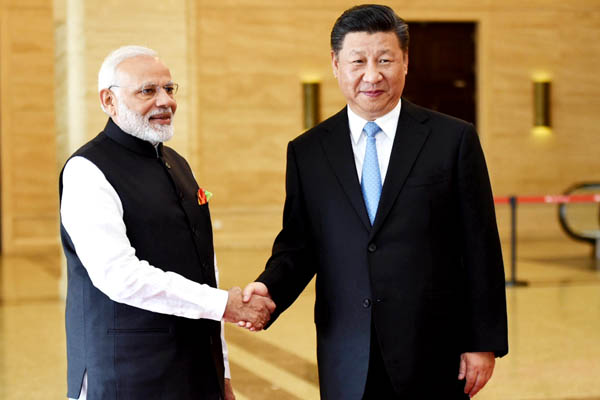 Beijing, Billed as an "informal" summit, Chinese President Xi Jinping is hosting Indian Prime Minister Narendra Modi in the central city of Wuhan on Friday and Saturday. According to a CNN report, the casual setting appears specifically calculated to avoid potentially complex policy negotiations and instead provide the two leaders, whose countries comprise more than 2.6 billion people and 17.6 per cent of the global economy, an opportunity to clear the air. Speaking to reporters on Monday, former Indian Foreign Secretary S Jaishankar described the surprise meeting as having no stated goals or set agenda. Conversations, suggested Jaishankar, will be "personal and interactive." For Modi, the benefits of stabilising relations with China are clear. Unlike his Chinese counterpart, the Indian prime minister is gearing up for reelection next year. Though Modi remains overwhelmingly popular among voters, a potentially bruising encounter with China, especially one that involves the two countries' armed forces, could see his poll numbers dented. By meeting with Xi, Modi can both help to mitigate that risk, while simultaneously opening up the possibility of increased economic cooperation at a time of global uncertainty. For Xi, the summit comes just months after term limits on the Chinese presidency were removed by the country's rubber-stamp parliament, effectively allowing him to govern for life if he chooses. Xi's consolidation of power clears the way for him to embark on a bold new period of statesmanship. The prospect, however unlikely, of the region's two major powers agreeing to join forces, would signal a significant geopolitical shift and the type of major policy win befitting Xi's new status. That Xi is receiving Modi on the same day as the leaders of North and South Koreas hold talks has raised eyebrows, but analysts view the timing as coincidental and not meant to overshadow the inter-Korean summit, especially considering the difficulties in scheduling and preparing for meetings between any senior leaders. "Xi has had his meeting with (North Korean leader) Kim Jong Un," said Duncan Innes-Ker, regional director for Asia at the Economist Intelligence Unit (EIU), suggesting people not read too much into the timing "given that the Chinese side has lined up its ducks when it comes to the coming Korean summit, and India is only tangentially interested and involved in the Korean situation at best." "As the leaders of the two largest developing countries, they feel that the two countries need to communicate in great depth on some long-term, comprehensive and strategic issues embedded in bilateral relations and international affairs," Chinese Foreign Ministry spokesman Lu Kang told reporters.