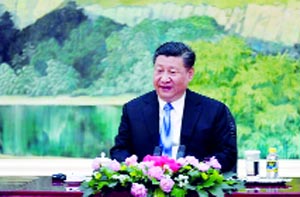 Agencies, Beijing China plans to change its law to allow judgments to be delivered in corruption cases even when the suspects do not appear in court, state media said, as Beijing ramps up pressure on graft fugitives hiding overseas. Over the last five years, Chinese President Xi Jinping has waged war on graft at all levels of the ruling Communist Party and has pledged that the fight must continue until corruption is impossible and unimaginable for officials. The campaign has also spread beyond China’s borders to graft suspects who fled the country, though efforts have been hampered by suspicion from Western nations unwilling to hand over suspects to a system in which they may not receive a fair trial. A proposed change to criminal procedure law submitted to parliament on Wednesday will strengthen the overseas graft fight by allowing judgements to be delivered in cases involving absentee suspects, the official Xinhua news agency said. The change allows prosecutors to proceed with a case if evidence against the graft suspect is ample and the crime is clear, even though the suspect may be abroad, Shen Chunyao, head of the rubber-stamp parliament’s lawmaking body, told Xinhua. In such “default judgement” cases, a copy of the subpoena will need to be sent to the defendant, Shen added.A similar system will be used in cases of the death of defendants or where mental illness makes them unfit for trial, Xinhua said. By October 2017, nearly 3,500 fugitives had been returned to China from more than 90 different countries and regions around the world, as well as assets worth 9.5 billion yuan ($1.50 billion), Xinhua added. China has turned up the pressure on graft suspects overseas by asking their family members to contact them and encourage their return, as well as by releasing personal details about the individuals, including their addresses. The proposed changes come soon after China passed a new supervision law and set up a powerful anti-graft commission to extend the graft fight to all state employees, whether party officials or not. The new system and law weaken rights protections for suspects by entrenching the use of controversial detention and questioning techniques that can allow abuse or torture, rights groups and legal experts say.