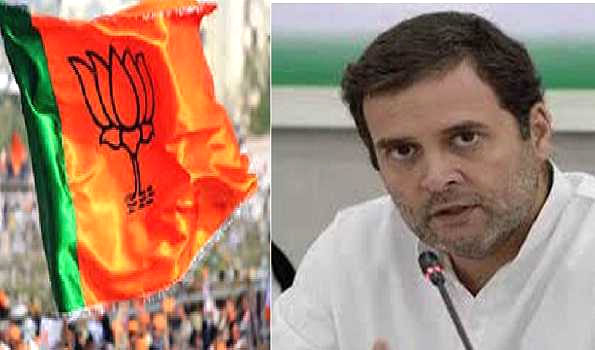 Agencies, New Delhi Hours after China blocked India's bid with strong backing from the US, France and UK to designate Pakistan-based JeM chief Masood Azhar as a global terrorist, the ruling BJP on Thursday joined issue with Congress President Rahul Gandhi and sought to remind him that Beijing's berth in the powerful UNSC was 'gifted' by Pt Jawaharlal Nehru. "China would not be in the UNSC had your great grandfather not 'gifted' it to them at India’s cost. India is undoing all mistakes of your family. Be assured that India will win the fight against terror," went a missive from BJP's official Twitter handle shortly after Mr Gandhi's criticism of Prime Minister Narendra Modi. "Leave it to PM Modi while you keep cosying up with the Chinese envoys secretly," BJP's tweet taunted Congress president for his supposedly a secret meeting with Chinese officials during the peak of Doklam controversy in 2017. China on Wednesday yet again blocked the UNSC move to take actions against Masood Azhar by putting on the the technical hold using its veto power. The BJP's missive castigating Pt Nehru's role in 'gifting' the membership to China in 1950s come on the historical background that after the United States did it part to deny the UNSC berth to China, it was Jawaharlal Nehru who advocated Beijing's case. There are multiple reasons cited by contemporary historians and strategic experts for Nehru's move -- one of them being 'misplaced' eagerness to play up Asian solidarity, where he felt India and China can be friends and co-travelers in the broader and global journey. The other reason attributed by many is that Nehru wanted to placate Chinese leadership in the light of increasing acrimony between two countries and India unable to meet up the the military expenditures to deal with Chinese challenges. In a tweet earlier, Mr Gandhi slammed NDA government and said Prime Minister Modi was being "weak" when it comes to dealing with Chinese President Xi Jinping. An MEA statement on Wednesday night termed UNSC failure to designate Masood Azhar as global terrorist as "disappointment". The government, has however, said that New Delhi "will continue to pursue all available avenues" to ensure that terrorist leaders who are involved in heinous attacks on "our citizens are brought to justice".