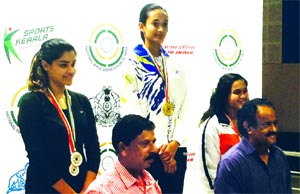 Chronicle Reporter, Bhopal In the 61st National Shooting Championship, being held in Thiruvananthapuram of Kerala from 11th to 31st December 2017, Madhya Pradesh Shooting Academy athlete Chinki Yadav set a new record and won gold medal. In addition to this Rifle shooters of Madhya Pradesh Shooting Academy made the state proud by winning one gold and two bronze medals. Appreciating their excellent performance, Sports and Youth Welfare Minister Hon. Yahsodhara Raje Scindia has congratulated the medal-winning athletes. It is notable that, as a result of the international level sports facilities and training that are being provided to the athletes in the Madhya Pradesh Shooting Academy, they are performing excellently in the national and the international competitions to make the state proud. In the final round of the championship, pistol shooter Chinki Yadav set a new national record by making 31 hits out of 50 and won a gold medal for Madhya Pradesh. Earlier in the championship, Chinki Yadav shot 575 targets out of 600 and secured first position in the Junior Qualifying Competition. In the Try Shoot for Bronze medal of senior category, Chinki yadav came at the fourth place. It is also noteworthy that Chiki Yadav is a talented shooting athlete and she has won 10 medals in various international competitions and 18 medals in national competitions. Likewise, in the Team Event of 50 m Rifle 3 Positions Junior Men Open Category, Madhya Pradesh Shooting Academy athletes won the gold medal. The winning team members include Araib Parvez, Aishwarya Pratap Singh and Harshit Binjwa. While, Harshit Binjwa in Individual Event and Goldy Gurjar in Senior Men’s Civilian Category, both won bronze medals.