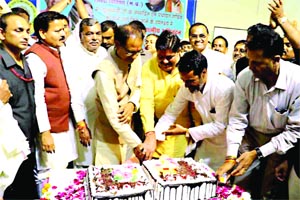 Chronicle Reporter, Bhopal Chief Minister Shivraj Singh Chouhan today sought blessings of elders and spent precious moments with orphan children on this birthday. Chouhan’s birthday was celebrated in the form of service day in the whole state. People from all walks of life, public representatives and elite citizens greeted Chouhan on his birthday at CM House. Citizens wished him a healthy and long life. There was immense enthusiasm among them. Youngsters in groups reached the CM House amidst victory slogans raised in his name. While some presented letters of felicitation to him, others dressed him in a safa and some even gifted him a gada. Chouhan accepted greetings from all with humility.Akhil Bharatiya Kirar Kshatriya Mahasabha representatives felicitated its newly appointed president Smt. Sadhana Singh Chouhan and the Chief Minister. Rs 4,000 to pregnant labourers for nutritious meals: Chouhan said that he will continue to serve the poor and work for the state’s development. He told that a scheme will be started from the month of April for welfare of women labourers. He said that pregnant women labourers will be provided Rs 4,000 for nutritious meals from six months of pregnancy till the time of delivery. After delivery, they will be given an amount of Rs 12,000. Power at flat rate of Rs 200 per month to poor: Chouhan said that electricity will be provided to poor persons at a flat rate of Rs 200 per month. Free education will be provided to children of poor labourers from Class I to PhD. He said that no labourer will stay without land or without accommodation. CM spends time with children at Bal Niketan: CM Chouhan began his day with prayers to Aaradhya Devi in the morning. Later, in the afternoon, he reached local Bal Niketan and spent time with orphan children on his birthday. He cut his birthday cake in their midst and distributed bedsheets and sweets to them. Chouhan said that government will bear all the expenses of education of children studying in such organizations for their education if they get admission in medical college, engineering college and other higher education institutes. He was accompanied by his wife Smt. Sadhana Singh Chouhan on the occasion. The children wished the Chief Minister long life and presented him with bouquets. On a request by children, Chouhan and his wife sang the song “Bachhe man ke sachhe”. Children sang devotional songs dedicated to Adishakti. Bhopal Mayor Alok Sharma was also present on the occasion. CM spends time with elders at Asra old age home: CM Chouhan reached “Asra” old age home at Shahjehanabad and sought blessings of elders. The Chief Minister spent some soulful moments with the elderly at the old age home. He announced to make a vehicle to facilitate service of the elderly at the Ashram and said that the elderly will not be left unassisted at any time. He said that arrangement has been made to make deductions from the salaries of those who are in government service and are not taking up the responsibility of their parents. Mukhya Mantri Teerth Darshan Yojana has been launched. He said that the elderly are the society’s asset and being equivalent to God, their service is true service to humanity. He cut his birthday cake amidst the elderly and distributed bedsheets and sweets to them. Revenue Minister Umashankar Gupta, Public Works Minister Rampal Singh, MLA Surendranath Singh, Bhopal Mayor Alok Sharma, Municipal Chairman Surjit Singh Chouhan, MLAs, representative teams of various communities, Director General of Police R.K Shukla and senior administrative officers greeted the Chief Minister on his birthday.