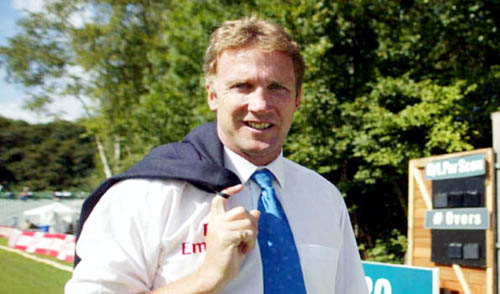 Pune, Chris Broad today became only the second member of the Emirates ICC Elite Panel of Match Referees to reach 300 ODIs when he walked out for the toss in the third ODI between India and the Windies here. Even though Broad made his ODI debut as an official in Auckland in 2004, 11 years after Ranjan Madugalle refereed in his opening match in Karachi, the Englishman now trails the Sri Lankan by only 36 ODIs. Jeff Crowe of New Zealand is third on the list with 270 ODIs, while former India fast bowler Javagal Srinath has officiated in 212 ODIs. Roshan Mahanama retired in 2015 after refereeing in 222 ODIs. Broad is presently sitting on 98 Tests and will become the second referee after Madugalle to complete a unique double by reaching the 100-Test mark in the second Test between New Zealand and Bangladesh in Wellington in March 2019. Madugalle also leads Broad 92-89 on a head-to-head in T20Is. A stylish left-handed top-order batsman during his playing days, Broad became an elite match referee in 2004, a year after refereeing in his maiden Test in Hamilton, and has since refereed in all the ICC Cricket World Cups. Played 25 Tests and 34 ODIs for England between 1984 and 1989, scoring 1661 and 1361 runs, respectively. In 1986-87, he hit three successive centuries in an Ashes series to equal Jack Hobbs and Wally Hammond’s record Played for Gloucestershire and Nottinghamshire and finished with a total of 21,892 first-class runs with 50 centuries and 105 half-centuries. Became an ICC match referee in 2003 and was elevated to the elite panel in 2004. Besides 300 ODIs, Broad has also refereed in 98 Tests and 89 T20Is. He will complete his century of Tests in the second Test between New Zealand and Bangladesh in Wellington in March 2019 Broad’s son Stuart is a regular member of the England men’s Test side, having taken 433 wickets in 123 matches. He also played in 121 ODIs and 56 T20Is, taking 121 and 55 wickets, respectively. In addition to the ICC Cricket World Cups in 2007, 2011 and 2015, Broad has also refereed in the ICC Champions Trophy in the years 2004, 2013 and 2017 as well as the ICC World T20s in 2007, 2009 and 2016. “I feel honoured and incredibly fortunate to be actively involved with the game for such a long period,” remarked Broad, adding, “300 is not a number for me but a story of all those who have made contributions and sacrifices so that I can live my dreams and achieve my objectives. On top of that list is my immediate family, and followed by colleagues in the ECB and ICC, and all my mates in the match officials’ panel. “I am enjoying my job as if it was my first day in the office. The passion is there to continue to do what I love most, and in the process, help as many people as possible," he said.“I have been very lucky to have visited so many countries, meet people from different cultures and backgrounds, and build relationships. Similarly, I have been part of some outstanding and edge-of-the-seat cricket, but the match that stands out for me is South Africa’s world-record run-chase against Australia in Johannesburg in 2006 when they scored 438 to win the five-match series on the penultimate ball with one wicket to spare,” Broad said. To mark the occasion, a memento was presented to Broad before the start of the match.