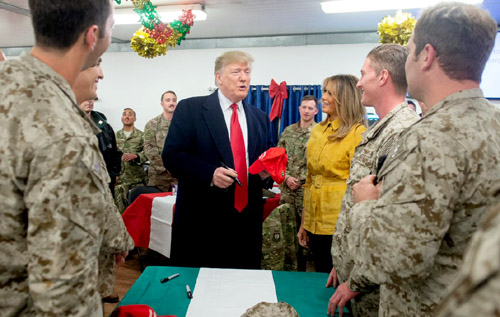 Washington, US President Donald Trump and First Lady Melania Trump have made an unannounced Christmas visit to US troops in Iran and greeted them. They visited Iraq on Wednesday, where he defended his decision to withdraw forces from neighboring Syria and declared that the Islamic State is “very nearly defeated” while making his first visit to a conflict zone as commander in chief. They travelled there "late on Christmas night" to thank troops for "their service, their success and their sacrifice", the White House said. Mr Trump said the US had no plans to pull out of Iraq, a report in BBC said. The US still has some 5,000 troops in Iraq to support the government in its fight against what remains of the Islamic State (IS) group. However, a planned meeting between Mr Trump and Iraqi Prime Minister Adel Abdul Mahdi was cancelled. Mr Mahdi's office said it was because of disagreements on how to conduct the meeting.