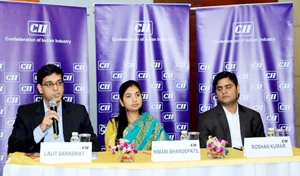 Panaji, On the Occasion of first anniversary of the implementation of Goods and Services Tax (GST) in India, CII Goa, organised a one-day Workshop on E-WAY Bill Implementation under GST at hotel in the city here on Friday. Ms Himani Dhamija Bhangepatil, IRS – Assistant Commissioner, Customs, CGST and Narcotics, Govt of India, congratulated CII for continuous support for GST and for being one of the first. The rules for implementation of nationwide e-way bill system for inter-state movement of goods on a compulsory basis will be notified with effect from April 1, 2018. This will bring uniformity across states for seamless inter-state movement of goods. Under GST, transporters should carry an e-Way Bill when moving goods from one place to another. Since it is a new rule introduced under GST, it is necessary for all consignors/ consignees/ transporters to be aware of the required compliance. Lalit Saraswat, Vice Chairman CII, Goa State Council, congratulated the GST Commissionerate, Goa, for their commendable efforts in ensuring that the business fraternity in the state undergo a smooth transition into the GST regime and termed it as the single most important achievement of this tax reform and the abolition of multiple taxes and bringing in a uniform indirect tax law across India. Deepak Gupta, Superintendent of CGST, Aurangabad CGST Commissionerate, Government of India was the resource person for the Workshop. The workshop was organised for CEOs, CFOs, CA’s, Financial Controllers and Tax Heads, Finance Managers, Accountants and Managers who are engaged in logistics and operations of goods. Speaking at the inaugural session Himani Dhamija Bhangepatil, Assistant Commissioner, Customs, CGST and Narcotics, Government of India stated that the GST Commissionerate was reachable anytime and open to all related queries. GST is a historical change in India to give economic independence to the businesses and commercial fraternity.A total of 17 companies nominated their representatives for the workshop.