City’s first Smart Road to be ready by June 25 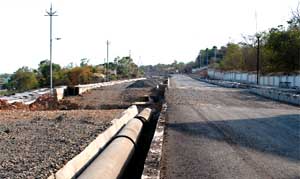 Chronicle Reporter, Bhopal, The city’s first smart road from Polytechnic Square to Bharatmata Chouraha would be ready by 25 June. Many works are in progress in the city under smart city project. Smart City road has gathered pace and all hindrances have been overcome. The smart city road project, estimated to cost about Rs 27 crore, has faced turbulence right from the get-go. The work on the smart road had started on 25 June 2017. However, it could not be completed within the time limit. The work is continuing after the deadline. Smart City Project officials said around 35% of the road development in non-populated area was completed without hurdle. Announcement about the four lane, 120-metre wide road stretching over 2.5 km, came in June last year. Officials said there were some disputes related to acquisition of land for the project and some cases were pending in the court leading to the delay. They said cable and power lines are being laid underground. Officials said the land close to the Police Wireless has also been handed over to the Smart City Project and so the case has been resolved and the work is now in final phase.      Highlights

The work on smart city is now in final phase. About 90 to 95 per cent work has been completed. The road would be ready by 25 June. -Nitin Kumar Dave, media manager, Smart City Project, Bhopal