Civil servants are responsible to ensure success of schemes and programmes 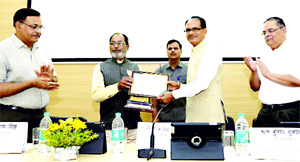 Chronicle Reporter, Bhopal The Chief Minister Shivraj Singh Chouhan has said that government schemes and programmes should be implemented in the form of public campaign by linking public and public representatives. Works undertaken with the cooperation of people ensure success. The success is several folds more in comparison to efforts made by any other means. Chouhan was addressing the Civil Service-Day Workshop at R.C.V.P Noronha Academy of Administration and Management today. CM Chouhan mentioned that public representatives are aware of the public sentiments, therefore balance coordination is must with them. We get better feedback from the public representatives as regard to the effects of the government’s schemes and public feelings. Civil servants are responsible to ensure success of schemes and programmes. The government schemes can only be successfully implemented, when its benefits reach the targeted category, we will fail to achieve the objective if we do not deliver benefit of the scheme to the people. Citing the role of the positive approach of the civil servants on the basis of episodes of the aims of various schemes and procedures, Chouhan said that civil service is not just a service, it is a mission. Civil servants are responsible to make bright future of the common man. He stated that all the arrangements of the democracy are meant for people. Hence, mechanism should work according to the feelings of the people. Chouhan further mentioned that government prepares policies and work to transform it into reality is being carried out by the civil servants. Moreover, Chouhan expressed that progress of society and public welfare is the aim of civil service. It is necessary to work by preparing a roadmap to achieve desired goals with positive approach and sensitivity. Rules and procedures should be created and implemented according to the set goals. Referring to the Mukhyamantri Asangathit Mazdoor Suraksha Yojana, he said that mission has been started to make the future of half of the population bright by this scheme. Utmost humane arrangements like residential plots for poor, house, education and treatment etc. have been made under the scheme. Every pregnant woman has right to nutrition food and rest. Rules and procedures should be set accordingly. Chouhan stressed on the need to give it a public campaign form by linking people for its effective implementation. Moreover, he laid emphasis to form a team of 5 persons at panchayat level to ensure successful implementation of this scheme. CM Chouhan stated that zeal towards work is most essential in the civil servant. Mentioning about the working style of the Prime Minister Narendra Modi, he said that a remarkable example of concern for the progress of some backward districts of the state has been presented by the Prime Minister. He himself is reviewing the progress of the backward districts. It is an ideal form of devotion and commitment towards the work. All should get inspiration from this. Chouhan citing the shlok of Gita, directed the civil servants to work with a team spirit and without prejudice and arrogance. Face challenges with patience, always filled with enthusiasm and do not get affected by success and failure. Chouhan assured the civil servants to contemplate on arrangements regarding security from the injudicious blames in connection to make their efficiency better and to take immediate decision.

Efforts for good governance in every era

The Chief Minister Chouhan while citing historical references mentioned that efforts for good governance have been made in every mechanism in every era. There are several achievements worth pride in various fields in Madhya Pradesh, which have been emulated in the country and abroad and are being even followed today. Fast progressing state, which has come out of the sick tag and achievements like increase of more than 5 folds in irrigation capacity, road network, changing scenario of development in urban and rural areas and Krishi Karman awards for consecutive 5 years are the result of the hard work of the state civil services. In case of shortcomings, they are also removed. Chouhan further mentioned that the civil servants also face unforeseen challenges successfully. There are several examples like onion purchase, procurement of gram, red lentil and mustard on support price etc. Chief Minister also mentioned about the revenue campaign and suitable effects of police campaign against the anti social elements. He said that impressive works have been undertaken in the state in the field of women empowerment and citizens rights. Successful efforts have been made for the welfare of the girls. Mukhyamantri Kanya Vivah Yojana, Ladli Laxmi Yojana and other schemes have transformed the life of the people. The successful work to provide a remarkable right to get citizen services within time limit has been carried out in the state also by converting citizen charter into a law. Chouhan emphasized on need for documentation of efforts and results of good governance for better projection. Presentations on schemes were given by the subject experts in the workshop. Additional Secretary Urban Development and Housing Rajeev Sharma gave presentation on ‘Swachchata Abhiyan in Urban Areas of the State’, whereas presentations on ‘Cyber Crime and Awareness’ by AIG Sudeep Goyalkar. ‘A Campaign against Untouchability- An Interesting Experiment’ by Principal Secretary K.C. Gupta, ‘Vano ki Vraddhi-Pradesh ki Samraddhi’ by Additional Chief Conservator of Forest, Research and Extension Dr. P.C. Dubey, ‘Expansion of Health Services in State’ by Mission Director-National Health Mission Vishwanathan, ‘E-Office Implementation in State’s Offices and Implementation of Chat board on Departmental Portal’ by Secretary to CM B. Chandrashekhran and presentation on ‘All India Tiger Estimation-2018’ by Additional Chief Conservator of Forest Alok Kumar were given.

The Chief Minister Chouhan honoured officers for their best work in Helpline and Samadhan Ek Din System in the programme. under the CM Helpline 181, Principal Secretary of Public Health Engineering Pramod Agrawal was honoured with Best Department Category ‘A’ award and category ‘B’ award was conferred to the Principal Secretary Animal Husbandry Department Ajit Kesri. Similarly Best District award category ‘A’ and ‘B’ were conferred to the Collector Dewas Ashish Singh and Collector Hoshangabad Avinash Lavaniya respectively. Best Departmental Manager category ‘A’ award was given to Shiv Mohan Soni of Public Health engineering department, Best District Manager category ‘A’ award to the District Manager Dewas Sourabh Jain, category ‘B’ award to the District Manager Hoshangabad Anand Jhairwar, Best L-1 Officer award to the Deputy Commissioner Cooperative Dr. Manoj Jaiswal, L-2 award to the Executive Engineer–Energy Mukesh Chourey were presented. In addition to this, Samadhan ek Diwas-Best Public Services Center category ‘A’ award to Seoni, category’B’ award to Pushparajgarh- district Anuppur, Best Authorised Officer category ‘A’ and ‘B’ award to Block Education Officer-Sehore Ravindra Bangre and Senior Agriculture Development Officer –Narsinghpur Arup Rawat were give respectively. The Chief Secretary B.P. Singh has said that this belief is improper that the Indian Administrative Services is based on the form of British governance system. He mentioned that the Civil Service Day is observed on the same day, when the first appointed officers of the civil services were addressed by the first Home Minister of the country Sardar Vallabh Bhai Patel after the independence. He further stated that the address of the Home Minister is the address to give the direction to the Indian Civil Services. On this basis, the model of civil services developed after the independence. Those who present in the workshop include Director General of the Academy Smt. Kanchan Jain, Director General of Police Rishi Kumar Shukla, Principal Chief Conservator of Forest Animesh Shukla. Vote of thanks was proposed by the Additional Secretary K.K. Katiya at the end of the workshop.