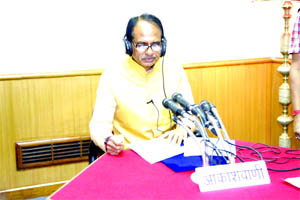 Girls’ self-defense training to be expanded

Chronicle Reporter, Bhopal Chief Minister Shivraj Singh Chouhan said that girls’ self defense training will be expanded. Chouhan replied to the suggestions received from the citizens through My Gov. App in the programme ‘Dil Se’ broadcasted by Akashvani and Doordarshan today. The CM Chouhan on the suggestion of Shailesh Sharma for teaching a technique of self-defense to the women to raise their moral, said that the women must learn the technique of self-defense so that they can strongly face the adverse situation any time and for teaching a good lesson to the goons. Chouhan mentioned that free judo-karate training for self defense is being imparted to the girl students of schools and the colleges by the trained personnel of police in Madhya Pradesh. Over One lakh girl students have received training under this programme till now. Moreover, judo –karate training is also being imparted to visually challenged girls for self defense by taking a unique initiative in the state. It will be expanded by making arrangements of other trainers besides judo –karate trainers of police department. Buddhasen Patel gave suggestion for providing sanitary pads without cost to the women. On this suggestion, Chouhan said that sanitary pads are being provided to the women on low rates. Sanitary pads are being provided to the girls in tribal blocks on just half rate. On suggestion of Dharmendra Panchal in connection to the distribution and marketing of products being manufactured by self-help groups, the CM Chouhan mentioned that the marketing of products is must. Efforts have been accelerated in this regard. Markets are being established by the state government in big cities to sell these products. By taking shops on rent in malls in the cities, these products will be exhibited and sold. He further mentioned that efforts are being made to increase the demand of the products being manufactured by the women self-help groups abroad also. Chouhan welcomed and deliberated on the the suggestions received from Vinita Namdev of Nari Chetna Mahila Mahasangh of Mehandwani Block –District Dindori, Pushpa Bai of Bamhorikalan, Palera district Tikamgarh, Karuna Thakre of Paraswada Nari Shakti Mahila Mahasangh of Balaghat and Rajkumari Chandrol of Chiraidogri –Mandla.