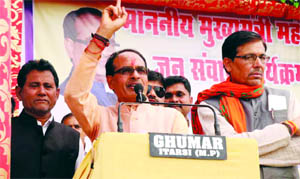 Chronicle Reporter, Bhopal Chief Minister Shivraj Singh Chouhan today took part in Jan Samvad in Manjarkui, Manjakhedi, Sukarwas and Bankot village of Budni Vidhan Sabha constituency in Sehore district. CM Chouhan said that an additional amount will be deposited at the rate Rs 200 per quintal on April 16 in the accounts of farmers who sold wheat on MSP last year. This year wheat will be purchased at Rs 1735 per quintal. After the purchase, the amount will be deposited in the accounts of registered farmers at the rate of Rs 265 per quintal. The Chief Minister said that registration of labourers will begin from April one. Farmers with 2 hectare will also be eligible for labourer registration. He said that relief amount has been increased to Rs one lakh 20 thousand after making amendment in RBC. Giving information about the government schemes including Medhavi Chaatra Yojana the Chief Minister said that all will have pucca houses by year 2022. The Chief Minister laid the foundation of four works of nearly Rs 17 lakhs in Manjarkui and dedicated a cemetry and C.C. Road worth Rs 24 lakhs. He presented cycles to 18 school students in Sukarvas.