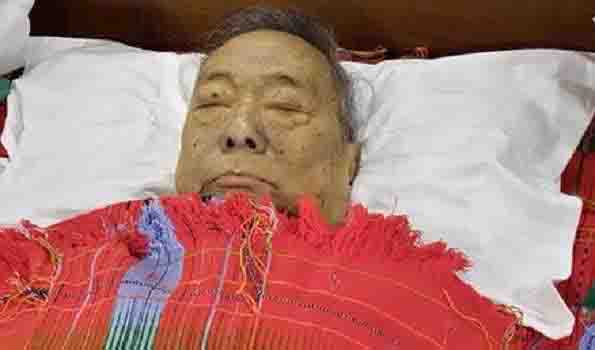 Imphal,  Manipur Chief Minister N Biren Singh today offered floral tributes to the mortal remains of former MLA Danny Shaiza at Nagaram, Imphal. Shaiza died after a prolonged illness yesterday. Upon his arrival at the residence of the former leader, the Chief Minister placed a wreath on the departed leader’s body and later consoled the grieving family members. The Chief Minister said that the State has lost a respectable leader who had a remarkable record of public service and good works. His contribution towards bringing unity among the people of the State will always be remembered by the people of the State, he added.The Chief Minister who was accompanied by Cabinet Ministers, public leaders, top civil and police officials, shared his deepest condolence with the bereaved family. Danny Shaiza was elected for three consecutive terms to the Manipur Legislative Assembly in 2000, 2002 and 2007 from Ukhrul Assembly Constituency. He is the son of former chief minister of Manipur Yangmaso Shaiza.