CM Vijay Rupani should be sacked, President’s rule be imposed in the state: Congress 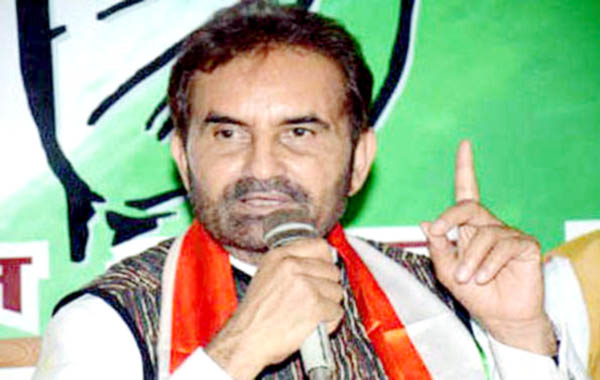 New Delhi, Alleging a conspiracy by the BJP behind the eviction of North Indians from Gujarat with direct involvement of Chief Minister Vijay Rupani, the Congress on Friday demanded that Mr Rupani should be sacked immediately by the BJP leadership for his Constitutional failures. Claiming a collapse of law and order in the state, the party demanded that President's Rule be imposed in the state.Talking to reporters here, AICC spokesperson and incharge for Bihar Shaktisinh Gohil alleged that a conspiracy by the BJP was behind the eviction of North Indians from Gujarat.’’ It is shameful that just a day after the gruesome rape of a 14-month-old girl in Sabarkantha district on September 28, BJP MLA from Himmatnagar, Rajendra Chavda spoke to the people/media and exhorted BJP workers to drive away North Indians who come in search of their bread and butter to Gujarat. It is now clear that none other than the Chief Minister of Gujarat ‘Vijaybhai’ Rupani has been fanning the sentiment of xenophobia and inciting hatred in the hearts of people against factory workers, labourers and khetmazdoors, who contribute to the economy of the state. This is not only an open threat to people from Uttar Pradesh, Bihar, Rajasthan, Chhattisgarh, Madhya Pradesh and other North Indian states, but also a well-planned strategy to evict such people from working in Gujarat. We demand that Mr Rupani should be sacked immediately by the BJP leadership for his Constitutional failures. Also, Prime Minister Narendra modi should speak up and apologize to the people of India and especially Gujarat, taking moral responsibility of BJP’s acts.’’Claiming that law and order had collapsed in the state, Mr Gohil demanded that President’s rule be imposed in the state. In this context, he alleged that nearly 165 FIRs were filed in connection with incidents of violence against the north Indians, which led to their exodus from the state. Charging the BJP of dividing Indians in the name of religion, caste, community and region, Mr Gohil said,’’Mr Narendra Modi fights elections to the Lok Sabha from Varanasi in Uttar Pradesh. The BJP won 73 seats in Uttar Pradesh and won 22 Lok Sabha seats from Bihar. BJP won all the seats in Rajasthan and Chhattisgarh and all but three seats in Madhya Pradesh. Still the BJP shamelessly targets the people belonging to these states. In the name of NRC, BJP targets other vulnerable Indians in Assam. For the first time, Punjabi Sikhs were violently targeted in Shillong, when BJP came to power in Meghalaya. In Gujarat too, BJP evicted Punjabi farmers living since independence, brought in and settled by Sardar Patel in Kutch and forcefully snatched away their land. On October 8, 2018, the key accused, a BJP worker and a close ally of a sitting MLA targeted people working in Amul Chocolate Factory, Anand who belonged to Madhya Pradesh. Gujarat is a land which has given birth to sons like Mahatma and Sardar Patel who taught us the philosophy of “Vasihnav Jan To Taine Kahiye’. Sardar Patel, on the other hand integrated the whole country bringing together 540 princely states, it’s unfortunate to see that the present lot of BJP leadership has got down what they know best, and that’s politics of divisiveness and sectarianism. ‘’ While condemning the initial statement by Alpesh Thakore, Mr Gohil, however, defended him for his recent initiatives to ensure amity. Condemning the initial statement by Alpesh , he said, ’’the Congress party's stand is very clear that no one has the right to take law in their hands and there should be harmony between the people of different communities and regions.’ Defending Thakore’s recent initiatives, Gohil said that after his initial statement, he (Alpesh Thakore) had made a lot of efforts to maintain harmony and peace and stop such attacks.’’Thakore's initiatives for ensuring amity between people came after Congress president Rahul Gandhi spoke to him over the issue. Gohil also demanded action against the BJP MLAs for inciting people against North Indians.‘’Those BJP leaders who have deliberately planned this conspiracy and whisper campaign should be immediately brought to book,’’he said and also demanded that the law and order in Gujarat be immediately restored.