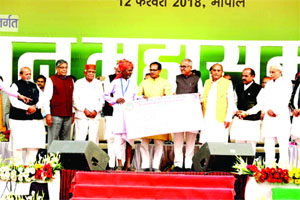 Chronicle Reporter, Bhopal Chief Minister Shivraj Singh Chouhan has said that the Chief Minister’s Agriculture Productivity Scheme will be implemented to give farmers fair price for their produce. Rs 200 will be given as incentive to these farmers under the scheme in addition to the support price on wheat and paddy. Bhavantar Bhugtan Yojana will continue. Farmers will be compensated with relief amount along with crop insurance for the losses incurred due to the recent hailstorm. CM Chouhan today made announcements at a Kisan Mahasammelan organized under Krishi Mahotsav and Bhavanta Bhugtan Yojana certificate distribution in Jamboori Maidan. He distributed Bhavantar certificates at the Sammelan and got Rs 620 crore Bhavantar amount transferred into the accounts of 3 lakh 98 thousand farmers online. CM Chouhan made several significant pro-farmer announcements at the Mahasammelan which are as follows:- Announcements – * Gram, Masoor, Mustard and Onion will be included in the Bhavantar Bhugtan Yojana in Rabi 2017-18. * Government will pay storage charge of up to 4 months on storage of gram, masoor and mustard in licensee godown in Rabi 2017-18. * Bhavantar Bhugtan Yojana will be implemented for onion crop in year 2018-19 for farmers. * One thousand custom processing and service centre per block will be opened. Farmers will be given the responsibility to run these centres. * Rs1200 crore will be spent to make the jungles in Chambal division cultivable. * Mandi rates of state and outside state will be displayed in 150 krishi upaj mandis through price tracker. * Grading and packaging plants will be set up in 50 krishi upaj mandis. * Colour sortex plant will be set up in 25 krishi upaj mandis. * Samadhan Yojana of pending loans of members of Primary Agriculture Credit Cooperative Committees will be implemented. At present this arrangement will be available in 4,523 committees. * The date of payment of short term crop loan distributed in Kharif 2017 by Primary Agriculture Credit Cooperative Committees will be extended from March 28 to April 30. * Kisan Credit cards of farmer members of cooperative sector will be changed to RuPay card. * Micro ATM machines will be established in Primary Agriculture Credit Cooperative Committees. * Animal husbandry credit cards will be provided to animal keepers for activities related to animal husbandry. * In place of 1500, 15 thousand beneficiaries will be benefitted from Acharya Vidyasagar Gou-samvardhan Yojana every year. * In the new system, amended khasra copy will be transferred within a month. * Now the date of demarcation will be given on the day the application is made. * Sharecropper farmers will now be able to give their land till five years. Even sharecropper farmers will be able to avail benefits of all schemes. * If villagers make their transport arrangement to get transformers, farmers will not have to pay rent for the transformer. There will be no interest on transformer connection. * If the transformer gets burnt in three months, no charge will be made. * Now defaulter farmers will also get loan to double the income of farmers. * Farmers who apply after depositing amount in Mukhyamantri Krishi Pump Yojana will not be charged for temporary connection. They will not have to take a temporary connection. The remaining condition will be made flexible. * Farmers who are defaulters for some reason will now again get loans on zero percent interest. Remaining interest will be paid by government. Farmers will be able to pay principle amount in two installments. After repaying one installment, they can apply for loan again. Government will pay interest of more than Rs 2600 crore in favour of farmers. * Currently 3 lakh 15 thousand hectares is being irrigated through 200 irrigation projects. In the next five years additional irrigation will be carried out in 1 lakh 30 thousand hectare.

CM Chouhan said that farmers’ crops have been affected by hail storm in a few parts of the state. Farmers need not worry as the state government stands with them in this hour of crisis. State government has taken several decisions earlier also in favour of farmers. The interest on agricultural loan has been reduced from 18 percent to zero. State government pays this interest for farmers. A flat electricity bill at the rate of Rs 7,000 per horsepower is given. For this the state government pays Rs 31 thousand per horsepower. State government pays Rs 10 thousand as irrigation expense on every 5 acre. Similarly a grant of Rs 3 thousand per acre is also given per family of farmers for loan on zero percent interest. State government pays interest on advance storage of fertilizer by farmers. State government pays Rs 9 thousand premium on every 5 acres under crop insurance scheme. It also pays Rs 20 thousand on every 5 acres in purchase on support price and Bhavantar Bhugtan Yojana. The Chief Minister said that the irrigation capacity in the state has been increased from 7.50 lakh hectare to 40 lakh hectare. Rs one lakh crore will be spent on increasing irrigation facility in the next five years. Rs 7.50 thousand crores will be spent on irrigation in Hoshangabad division. In the next five years irrigation will be carried out in 4 lakh 50 thousand additional area in Bundelkhand. In Chambal, additional irrigation will be done on 3 lakh 10 thousand hectare area on which Rs 5 thousand crore will be invested. About 11 lakh 5 thousand hectare new area will be irrigated with Narmada water in Malwa region. Six lakh 15 thousand hectare area will be irrigated in additional in Revanchal region. And additional irrigation will carried out in 4 lakh 90 thousand hectare area in Mahakaushal area. Six lakh 40 thousand hectare area will be irrigated in Bhopal division. Government to pay warehouse expense for four months CM Chouhan said that the state government purchased onions worth Rs 650 crores from farmers when the price of onions came down last year. The Bhavantar Bhugtan Yojana is being implemented in other states also. Under this scheme if the farmers do not wish to sell his crop immediately and wants to store it authorized warehouses, the state government under such conditions will pay the warehouse expenses for four months. Similarly Bhavantar Bhugtan Yojana will be implemented for gram, masoor and mustard. In the Yojana, if the farmer keeps his crop in the warehouse, he will be given 25 percent of the value of his crop for his needs by the Cooperative Bank which he will return once his crop is sold. The interest on this amount will be paid by the state government. State government will pay 15 percent grant and guarantee of loan up to Rs 25 lakh to Rs 2 crore to the children of farmers under Mukhyamantri Krishak Udyami Yojana. Also, it will pay the 5 percent interest for seven years. The Chief Minister said that this government is a pro-farmer government and is creating new history for the welfare of farmers. Agriculture Minister Gaurishankar Bisen said that Madhya Pradesh is the first state of the country for having introduced the Bhavantar Bhugtan Yojana. In this scheme, Rs 1512 crore is being deposited in the accounts of farmers for 8 crops. Six tractor training institutes are being opened in state. Along with this soil health cards are being given to 90 lakh farmers. Farmers were provided certificates of Bhavantar Bhugtan in a symbolic form and certificates were also distributed Mukhya Mantri Yuva Udyami Yojana beneficiaries during the programme. During the programme, Vidhan Sabha Speaker Dr. Sitasaran Sharma, Forest Minister Dr. Gaurishankar Shejwar, Energy Minister Paras Jain, former Chief Minister Babulal Gaur, Member of Parliament Nandkumar Singh Chouhan, Member of Parliament Alok Sanjar, MLA, Kisan Ayog Chairman Ishwarlal Patidar, Kisan Sangh office-bearers and a large number of farmers were present on the occasion. Minister of State for Agriculture Balkrishna Patidar proposed the vote of thanks.