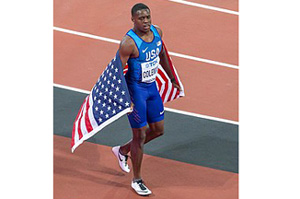 Undated, World silver medallist Christian Coleman broke the world record in the 60 metres when he ran 6.34 seconds at the U.S. indoor national championships in Albuquerque, New Mexico on Sunday. Fellow American Maurice Greene had held the record of 6.39 seconds for 20 years. "It feels like a blur," said the 21-year-old Coleman, who won the 100-metres silver medal at last year's world championships in London. Now he will lead the American team to next month's IAAF world indoor championships in Birmingham, England. The performance at high altitude in Albuquerque was particularly pleasing for Coleman after he had bettered Greene's world record time with a run of 6.37 seconds last month in South Carolina, but was not ratified for technical reasons. "I wanted to go get it," Coleman said after the race. "I put a lot of work in my start and transition. It's all paying off."