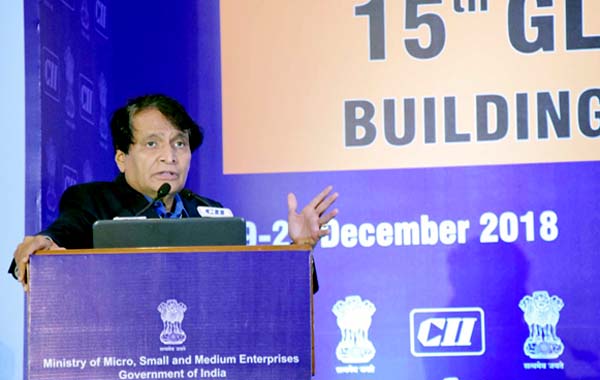 New Delhi, Union Commerce and Industry Minister Suresh Prabhu said on Wednesday the Ministry was examining the proposal to set up trade promotion bodies in 15 countries to promote exports of SMEs from India. ''The Commerce and Industry Ministry was committed towards the growth of the SMEs that are the pivot of the overall economic growth of the country,'' Mr Prabhu said, addressing at the inaugural session of the 15th Global SME Business Summit here. The Minister spoke about the changing of trade regimes globally and establishment of new trade routes based on availability of labour and skill. Mr Prabhu said Global Value Chains(GVCs) are specifically significant for SMEs as they provide them the opportunity to contribute to exports without bearing the setup costs. ''The concept of trade has been changing where larger enterprises increasingly rely on outsourcing the manufacturing activities. This practice has proved quite advantageous to the MSMEs where they can participate in the exports through manufacturing of intermediate products,'' he said. The Commerce Ministry was also working on a comprehensive strategy to boost the MSME sector by granting new patents in record time, he said. ''New Intellectual Property regime is being launched to strengthen the IPRs of Indian MSMEs as well as protecting IPRs of the other countries,'' Mr Prabhu said. The two-day Summit has been organised by the Ministry of MSME in partnership with CII. The inaugural session was also attended by Union MSME Minister Giriraj Singh, MSME Secretary Dr Arun Kumar Panda and other senior officials, according to an official statement here.